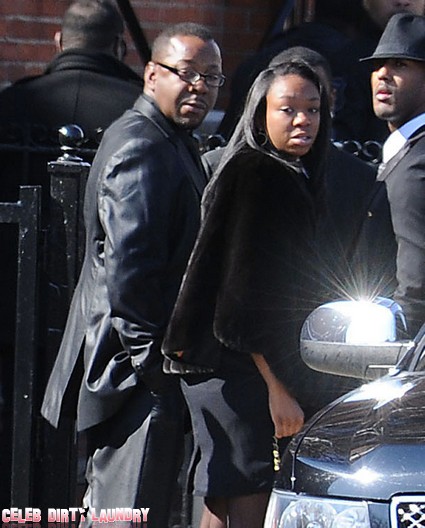 Bobby Brown arrived at the service at the New Hope Baptist Church in Newark, New Jersey, on Saturday and walked up to Whitney Houston’s coffin and lovingly touched it.

Bobby was accompanied by an entourage of nine people who he wanted to sit with him in the family section of the congregation.  When he was told this wasn’t acceptable and they would have to be seated elsewhere he angrily stormed out with his group.

However, Bobby – whose 18-year-old daughter Bobbi Kristina was sat directly behind her mother’s coffin with her grandmother Cissy Houston – later returned to the Baptist church on his own and was seen entering through a side-door.

Many of Whitney’s family have blamed Bobby – whose tumultuous 14-year marriage to Whitney ended in divorce in April 2007 – for getting Whitney hooked on drugs. Her death on February 11 is believed to have been caused by a lethal mix of alcohol and prescription pills.