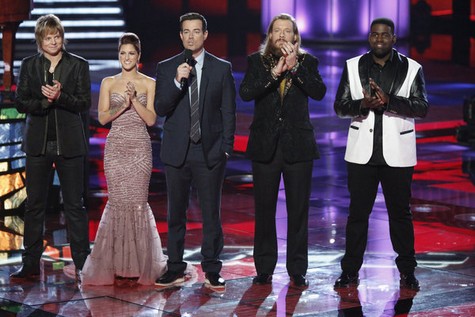 Tonight on FOX is an all new episode of THE VOICE. On tonight’s elimination show America will vote to eliminate one artist and the remaining three contestants will move on to the final phase of the competition. Did you watch last night’s show? We did and we recapped it here for you!Did you miss any of the performances, if you did you can see all the video’s here.

Last night, the top 4 artists performed inspirational themed songs, live in front of coaches Christina Aguilera, Adam Levine, CeeLo Green and Blake Shelton for America’s vote and a chance to move on to the semi-final phase..

Our favorite artist of the night was Terry McDermott – Team Blake – Let It Be – It is seldom that a singer is able to do this Beatles classic and bring us to tears. Terry did justice to one of the greatest songs ever written, and ripped out our emotions with his power vocals and open soul. We were waving our faces with our hands to stop the tears from running – proof that Terry should win this entire competition.  He is, by far, one of the best contestants in the history of this show. OUR SCORE – 10 out of 10

On tonight’s result show three of last season’s competitive artists will perform. Mann will sing his new hit “Roads” while Simms will offer her new song “Wild Child” and RaeLynn will perform her own new song in “Boyfriend.” In addition, the top four artists from the current cycle will be paired to perform duets on the December 11 show.

We conducted a poll today and 45.5% of our readers think we will be saying goodbye to Trevin Hunte tonight.   Second place goes to Cassadee Pope with 27.7% of the vote.  If you have not voted in our poll there is still time, go here!

Tonight’s “Live Seminfinals Results Show” is going to be an exciting one, which you won’t want to miss. So be sure to tune in for our live coverage of NBC’s The Voice – tonight at 8PM EST! While you wait for our recap, hit the comments and let us know what you have thought of Season 3 of The Voice, so far!

Tonight’s Show: Tonight’s Semifinal results show opens with Carson quizzing the judges about last night’s show.  Terry McDermott and Cassadee Pope  are opening the show with the first performance.  They are performing Little Talks from Of Monsters and Men.

Up next is Juliet Simms singing her new song “Wild Child.”   Then Juliet gives advice to The Top 4.

They next air an Carson interviewing the Top 4 and how they feel about being in the top 4 and what made them want to be a singer.  The complete interview is available on NBC.com

Next we get a love fest between Trevin and Nicholas where they profess their love for each other.

We are treated to a performance by RaeLynn of her new song Boyfriend.

Next we get to find out who each judge and artist would like to be on a Desert Island with.

A performance by Chris Mann is next, singing his new hit Roads.

Tony Lucca and Adam Levine are being interviewed.  Tony Lucca has been signed by Adam’s record company.