Who Hates Who In Hollywood? We Have The Scoop! 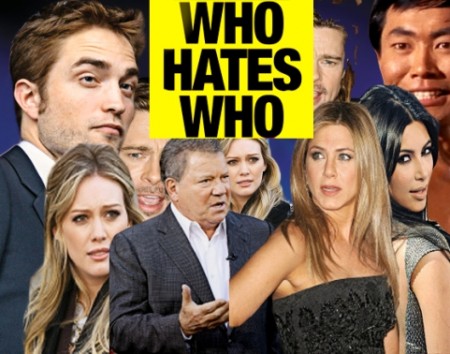 The National Enquirer is shocking with its cover headline this week and unveiling who hates who in Hollywood. It doesn’t take a lot to ruffle feathers in a town where insecurities and jealousies run rampant, but some stars take feuding to a whole new level.

The article sites the most recent feud between British darlings Adele and Robert Pattinson. A rift occurred between the two when Rob put his foot in his mouth and tried to give the Grammy winner advice on her career. She shot the Twilight star down with, “You do realize I am like the biggest-selling female artist ever?”

But those young ins have nothing on some of the veterans in Tinsel Town. The magazine lists sisters Olivia De Havilland and Joan Fontaine as carrying out one of the oldest feuds going back to the 1940s and Star Trek alums William Shatner and George Takei still can’t stomach each other years after getting off that spaceship.

And who can forget when Chelsea Handler took her friendship to Jennifer Aniston too seriously and freaked out over Angelina Jolie calling her a “home-wrecker” during her stand-up act? Needless to say, Angelina hasn’t made an appearance on Chelsea Lately.

For more celebrity feuds be sure to check out the magazine this week. Do you have any personal favorites? I will always have a soft spot in my heart for Hilary Duff and Lindsay Lohan’s fight over Aaron Carter, but I’m old school like that. And I did applaud when Jon Hamm called Kim Kardashian stupid. And I like it when Rosie O’Donnell trades barbs with anyone since she starts haiku-ing all over the place when she’s angry. But my all time personal favorite would have to be Elton John against Madonna. Those b-tches get nasty with each. It’s hilarious!