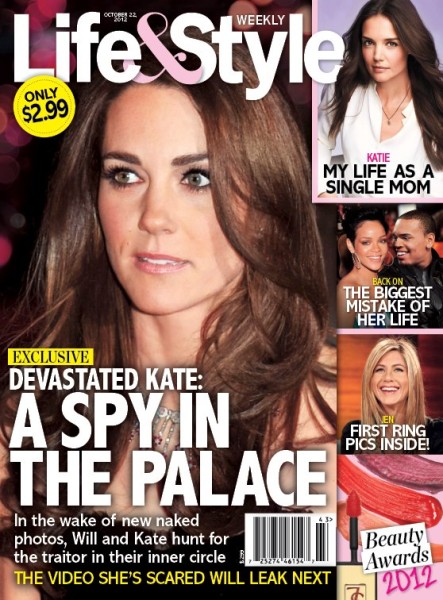 It’s like a real James Bond film! There’s a spy in the palace. How exciting! Well, maybe not for Kate Middleton who has taken to showering in a Victorian-style bathing suit, but for us gossip lovers this is pure gold.

The Life & Style cover this week reports that Prince William and Kate are driving themselves all King George III (mad) over the idea that they’re harboring a mole who’s more interested in selling their stories and making money than protecting their emotional well being. That was a no brainer.

“Kate’s freaking out,” an insider told the mag. “Kate and William are paranoid there’s a spy in the palace who’s giving away their secrets. So much has been slipping out that it can’t be explained as coincidence. There’s a report that a video may have been shot of them sharing some intimate moments. Kate is horrified about what else may be released.”

We’ve already reported about the video. If I were Kate, I’d be pretty nervous about that too. Naked videos of future kings and queens – like diamonds – are forever. But the idea of a mole is much more interesting because it means some if not all of the random, ridiculous stories we hear about can actually be true. Usually I assume most, if not all, are completely made up by the tabloids. The mole gives me hope! Which ones do you want to be true? I particularly like the Reese Witherspoon baby story and the William freaking out at Prince Harry about his incessant flirting with Kate rumor. Please let those be true! Which are your favorites?

But who could be the mole? It would have to be a member of the staff, right? William and Kate – or rather just William – has a strong circle of friends who’ve rarely given him up in the past. I’ve watched my share of documentaries on palace life and it always astounds me by how many people are milling around at any given time. Sure they’re not vacuuming while the Queen reads on the sofa but they’re about and any enterprising spoon polisher can make an extra buck with a lame story based on what somebody’s aunt’s sister’s best friend’s cousin’s boyfriend thought he saw. It’s almost too easy because the demand is too high. But really, hasn’t the shit already fit the fan? I now know what Kate Middleton’s areolas look like. It can’t get much worse than that.

Will you pick up Life & Style to learn more about the potential intimate video? I might. The cover doesn’t mention a faux baby bump so I’ll give the magazine credit for thinking outside the box this week!