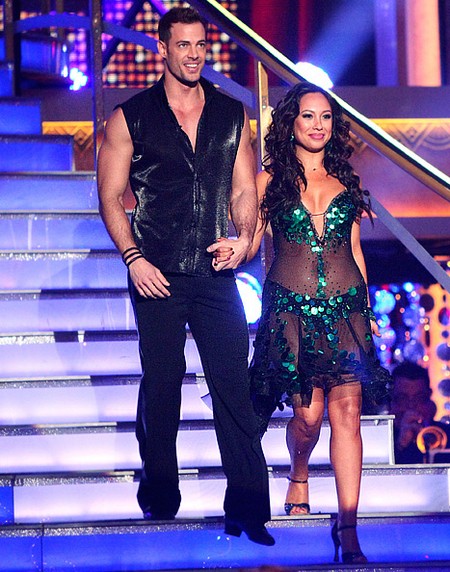 William Levy danced the Cha Cha Cha for the judges choice tonight during the first night of Dancing With The Stars finale week. Tonight each couple will complete in two dances.  One dance will be chosen by the judges it will be a dance that they have previously performed.

The second dance is the ever popular freestyle which will be danced to music that the couple has chosen themselves, this sounds fun – I can’t wait to see what they come up with!    We recapped the tonight’s show for you and if you want to see how all the couples did go HERE!  Did you see William’s performance last week if you missed it or any of the videos you can see them all here!

William Levy and professional dancer Cheryl Burke, dancing the Argentine Cha Cha Cha – their coach for the evening was Bruno.  William and Cheryl had this to say about tonight’s performances: ” William will not holding anything back for his last dances during the “Dancing with the Stars” finale.   We can also expect to see William shake his hips again.”

Judges Comments: Len:  Fantastic!  As good a Cha Cha as I have seen in 14 seasons.  Bruno:  That  was that intoxicating Cuban cocktail of lateral forward movement. Apart from that your hip action was fantastic and I am green with envy. Your placement is excellent.  Carrie Ann:  This is where we first saw the magic that was William Levy. But what they’re now sophisticated and you have perfected everything.

Tomorrow the couples will perform a new routine in a “24 Hour Challenge” where they will have had 24 hours to pair a dance style of choice to music given to them after tonight’s show. This dance routine will get a score of up to 30 and will round out the judges’ scores from both nights.   At the end of it all tomorrow night one contestant will be award the Mirror Ball Trophy!  Who do you think will win?  Hit the  comments and let us know who you think will be going.

Watch the video below and let us know what you think? Do you think that William did enough to win the Mirror Ball Trophy? Sound out in the comments below!