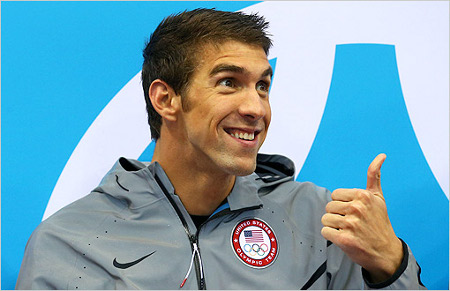 Michael Phelps is the most famous Olympian in history, with 22 medals to his name for swimming events. He has been a force to be reckoned with, much like the crazy fast Usain Bolt, but now it seems that Phelps is gambling away his fortune — on poker? Wait, how does that joke go? A poker player and a swimmer walk into a bar . . . .

The London 2012 Olympics was Phelps’ final moment in his swimming career. He has amassed a fortune in endorsements and has become one of the most recognized athletes in history. However, Phelps hangs out with pro poker players and has gambled away a fortune. His swimming career is over and it seems that Phelps will squander his fortune in poker playing. A friend of Phelps told National Enquirer, “All Michael thinks about is gam-bling. When he’s home in Maryland, Michael plays in a weekly card game where the buy-in is $25,000. Michael has wagered hundreds of thousands of dollars on poker already, and now that he’s retired from competitive swimming, every¬one’s worried he’ll be betting mil¬lions more.”

Phelps jetted to the Maldives before the closing ceremony of the Olympic Games to play poker with his poker-loving friends. The source said, “Michael would love nothing more than to embark on a career as a professional poker player, but unlike Mike, his professional poker-playing buddies know when to fold ’em and walk away. Michael has a ‘don’t quit until you win’ atti­tude which was great while he was swimming but could be costly playing poker.”

According to the professional poker player, Phil Collins, “[Phelps] talks about poker all the time. We have to tell him every once in a while, ‘Jeez, Mike. We play for a living. Can we take a break?” Phelps used online poker games to help him learn the game. He admits, “I love to play poker. I’ve been playing for a few years… I’ve met some of my best friends at a poker table.”

A poker player informed The Enquirer, “In online betting for high stakes, there usually is a standard $20,000 buy-in, and a player can easily lose six figures in an afternoon.”

Phelps’ infamous pot party back in 2008 also has a poker connection. The “bong” Phelps used belonged to Zachary “Carter” King, a poker champion who was arrested for pot possession in an unrelated incident. Phelps is worth $45 million, which is a few dollars past let’s-eat-money-shall-we? The insider adds, “Michael is on top of the world right now, but if he lets the gambling, the girls and the high living get the best of him, it could all come crashing down!”

We hope Phelps doesn’t waste all his money on poker. This dude seriously needs a friend intervention. Oh, wait, what did you say? All of his friends are also poker players? He is one of the most competitive swimmers in human history? Oh well, at least he might be able to secretly sell his medals when the money dries up. Do you think there’s a cure for Phelps’ gambling addiction? Someone throw him a life preserve!