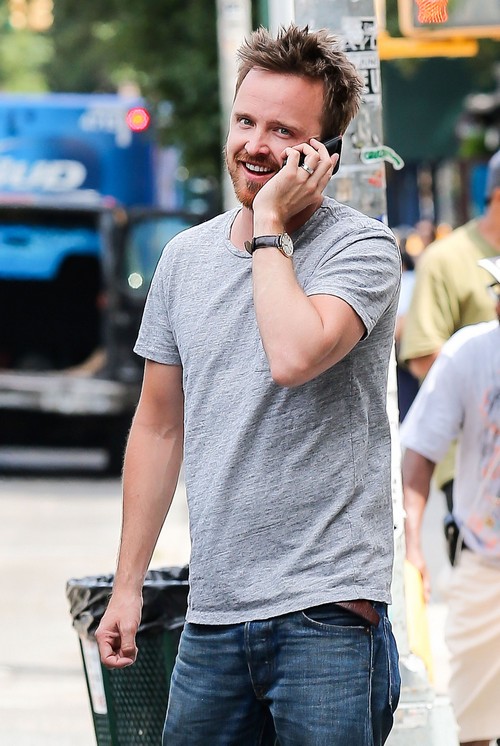 Aaron Paul went on Jimmy Kimmel Live on Wednesday to promote Breaking Bad and discuss the show’s finale. But first, before we get into any of that, we have to discuss Aaron’s beard and bloat. What is going on? Is the beard for a role? Is it for fun? And why does he look bloated?! Please be for a role, please be for a role.

Ok, I’m done. On to the actual show. Aaron is always a good interview, and he continues to prove that. He spent time discussing his fans and the different ways he interacts with them, which includes Twitter, scavengers hunts, and outside his house. See, this is one of the only examples of a celebrity being TOO nice. Eventually, some Breaking Bad nut is going to break into his house and attempt to kidnap him or something equally crazy.

When the topic comes to the show’s finale, Aaron plays coy, and the only thing he’ll say is, “Last week’s episode was pretty messy, and the final two episodes are so much messier. It gets so crazy. I can’t wait for people to see how it all plays out.”

Aaron also adds that he’s ‘depressed‘ about the show ending, although I don’t see why he has to be. He has some major films lined up, including the lead in Dreamworks’ Need for Speed, as well as a major supporting role in the epic Moses film starring Christian Bale. He doesn’t have anything to be depressed about. Although I suppose he is a fan of the show as well as a star, and it’s depressing that the show’s ending for any fan.

What do you guys think about Aaron’s comments regarding the show’s ending? Let us know your thoughts in the comments.