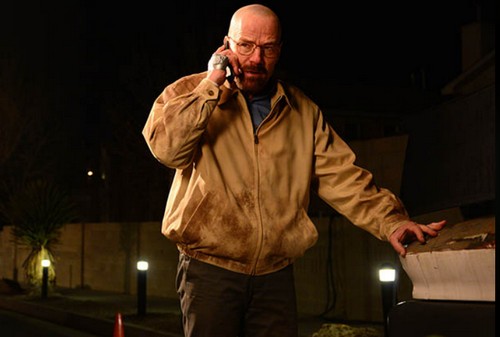 Get ready BREAKING BAD fans, tonight is another new and exciting episode of our favorite show and things are really heating up for Jesse and Walt.  On tonight’s show everyone copes with radically changed circumstances.  Did you watch last week’s episode?  If you want to catch up before tonight’s show, we have a full and detailed recap, right here for you!

On last week’s episode it showed us once again why we love Breaking Bad.  Hank and Walter shared an intense moment, which involved some guns being drawn and some words being thrown.  Any feelings that Walter had for Jesse are fast coming to an end and a showdown is coming between the two.  Walter knows that Jesse is out to get him and he has to get Jesse first, it is a question of survival.

On tonight’s show there is going to be a pretty intense shootout and bullets are definitely going to be exchanged.  The title of tonight’s show Ozymandias, is named after the poem by Percy Bysshe Shelley about the inevitable fall of kings and empires and it seems to prepare us for Walter’s inevitable downfall.  In Walter’s mind he is on a fixed path of despotic and violent hegemony over all those in his realm, family, friends, associates, enemies, peers and rivals.  As he says in the poem, “My name is Ozymandias, King of Kings / Look on my works, ye mighty, and despair!”

Celeb Dirty Laundry will be covering all the drama of this final season and you don’t want to miss this highly acclaimed television show featuring these top-notch actors. Prepare for the final Breaking Bad sprint to the finish line and join us each week for our live recap of Breaking Bad at 9PM EST!  If you are curious what is going to happen tonight we have a sneak peek video and some spoilers for your enjoyment right here.

RECAP: We see Walter and Jesse cooking in the RV like they did in the very first season of Breaking Bad, Jesse goes to smoke and Walter tells him to get out of the RV to do that. Walter goes out and Jesse follows; Walter gets dressed and he walks into the desert. He calls Skyler and comes up with an excuse for being late at home; she tells him it’s fine and tells Walter to pick up a pizza on his way home. Skyler asks Walter if he likes the name Holly for their baby and he says he’ll think about it; Jesse is swinging something in the distance yelling and Walter brings up having a family thing on the weekend. The two say goodbye; Walter disappears then Jesse does and finally the RV is gone.

Jack gets the coordinates of this place and they go digging for the money; a man comes back and says he hasn’t found Pinkman whatsoever. The guys start digging looking for Walter’s buried treasure; Walter is still on the ground and is just completely broken. The men find all the money in the barrel and start cheering; time goes by and they have all the barrels. They put them in the back of their truck and drag Hank’s body somewhere else; Walter just notices something under the car Jesse was in. Jack tells Walter that he’s leaving him a barrel and the uncuff him, Todd tells him sorry for his lost and walks away. Jack tells him Todd respects him and that Walter will drive out of there with no hard feelings. Jack holds out his hand, Walter turns around and shakes his hand. Walter then says that they owe him Pinkman; Walter sees him underneath the car. They pull out Jesse from the car, Jack aims a gun to Jesse’s head, Walter nods to Jack; Todd comes over and says that they should find out what Jesse told the police. Jack says it works and Walter just nods; Jesse starts screaming no and Walter tells them to wait. He tells Jesse that he watched Jane die, he watched her overdoes and choke to death and that he could have saved her; but he didn’t. They drag Jesse away and Walter just stands there.

Walter gets into his car and fixes the mirror; he starts it and drives off. His car starts slwoing down and he’s out of gas; Walter gets out and then notices that his gas tank is leaking; probably from a stray bullet; Walter starts rolling his money barrel and walks his way out of the desert.

Walter is rolling his money to this house in the middle of nowhere; the owner comes out and say hi to Walter. Walter asks if he can buy the mans truck, the man says it’s not for sale; Walter goes over and hands the man a wad of cash; Walter puts the barrel on the truck. Marie drives up and heads into the car wash, she gives a hug to Junior and he asks what she’s been up to. Marie says Junior can hold down the register and they should go to Skyler’s office; the two are sitting there quietly. Marie tells her to sit there and listen; she tells Skyler how Hank arrested Walter and how Jesse Pinkman supplied them everything they needed to get him. Marie tells Skyler she’s happy about it, Marie says she has no idea if she could ever trust Skyler ever again after all this. Marie says she forces herself to remember Skyler is her sister and that’s why she is there, Skyler says everything changes now and that Hank will help her. Marie says she wants every copy of the DVD against Hank, Skyler is crying and says yes. Marie tells Skyler she has to tell Junior everything but she keeps saying no; Marie tells her either Skyler does it or she will. Jesse is laying in some sort of concealed room with a bloody face. Todd puts a ladder into this pit of a room and Jesse tells him he has done everything they wanted. Jesse is crying about how only he and Walter knows about something and they should go to his house and get it; Jesse is brought into this dark warehouse. Todd flips the lights on and it’s a lab; Todd chains Jesse up on some sort of weird leash, he uncuffs him and starts walking around the lab. Jesse sees a picture and Andrea and Brock on the wall, Todd comes in and tells him it’s time to cook.

Junior is in the office with Skyler and Marie; he doesn’t believe either of them and tells them they are full of shit. He asks why they were lying to him all this time and whether they are lying now and calls it all bullshit; he wants to call his dad. Junior calls Hank and Marie tells him to just calm down. Junior barges out of the office, Marie tells Skyler to go home with the kids but Skyler is busy crying. Walter is at home and he takes all his clothes; he throws them in his suitcase. Skyler is driving home with Junior and she asks him to put his seat belt on; he tells his mother that she is just as bad as Walter. The two arrive at the house and notice a weird truck, Walter then tells them all to pack and leave. Junior asks him to please talk to them, Walter tells him to listen and go grab everything that is important. Skyler asks him why he’s there, Walter tells them to rush it. Skyler asks where Hank is; Walter said he negotiated and says they are fine. But they have to leave right away, Skyler won’t drop it. Walter tells them to both trust him and leave the house, Skyler asks where Hank is again. Walter goes over to her and says he has $11 million outside and they can start new lives. Skyler then says he killed Hank, Walter says no and then says he tried to save him. Walter tells them it will all be fine and they should leave; Skyler goes to get a knife in the kitchen, she points it at Walter and tells him to get out of the house. She says it’s enough, Walter tells her to stop it; she tells him to shut up and get out of the house. Walter walks to her and she cuts his hand, the two fight and Junior tells them to stop it frantically. Junior jumps Walter and saves his mother, Walter asks them whats wrong with them and that they are family. Junior calls the police and says his dad is dangerous and might kill somebody. Walter then leaves with the baby; Skyler runs outside chasing him, She is slamming on the windshield but he backs up pushing her car out of the parking lot. Walter drives off with Holly, Skyler is running down the street screaming but he is long gone, Skyler falls to her knees and cries.

Walter is at a washroom changing Holly, he wrapped duct tape around the cut on his hand Skyler gave him. Holly starts asking for Momma, Walter then hugs her and looks heart broken. The police are at Skyler’s house and an Amber Alert is made for Holly; Marie is at the house with them now. A phone call is made and Walter tells Skyler to pick up, the police start tracing him. Skyler picks up and asks Walter where Holly is, Skyler confirms there is no police; Walter then asks her what the hell is wrong with her. He tells her that she needs to learn, Walter then says that she was never greatfull for anything he did for the family. He then goes on about how she kept complaining all the time and now she told Junior and he calls her a stupid bitch; Skyler then says she is sorry. Walter then says she has no right to discuss anything he does and that she knows nothing; he tells her that she may just end up like Hank. Skyler asks where Hank is and that she needs to know, Walter then says they will never see him again. Walter explains how he crossed him and they should think about that and let it sink in. Skyler begs for Holly to come back and that he should just come home, Walter says he has things to do and hangs up. Right after he breaks his phone and looks in at his daughter sleeping in the car. At a local fire station they notice the lights on in their fire truck and they find Holly sitting there in her chair. Walter is sitting at the side of the road like Jesse once did with all his belongings; the van pulls up and Walter gets in.