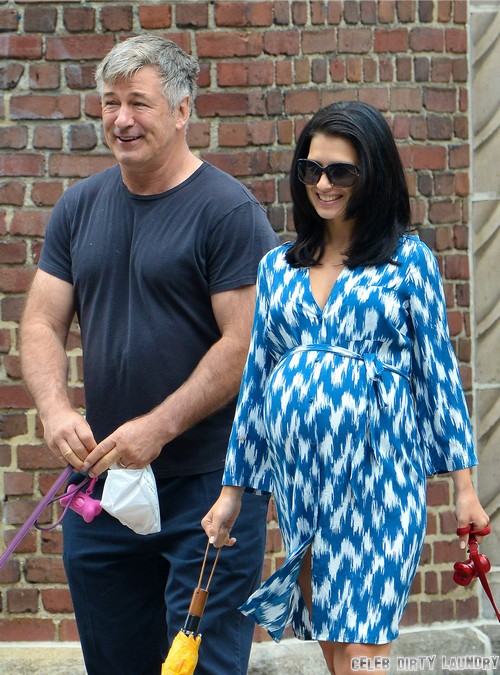 Great news for Alec Baldwin, his wife Hilaria Thomas has finally given birth to their baby girl, Carmen Gabriela, in New York today; Hilaria even went ahead and said, “She is absolutely perfect.”

But the question is how long will this perfection last? We already know that Baldwin has said some very homophobic things in the past so will he even be a good influence on his daughter? Will he raise a daughter who’s also incredibly homophobic and rude to people – saying ignorant and stupid things? Who knows, maybe another child will knock some sense into the man.  Alec looked like he was enjoying his own sympathy pregnancy as CDL kindly observed recently.

Thank God Baldwin didn’t name this child stupidly like he did the last daughter that he had with his ex-wife Kim Basinger; by the way her name is Ireland. Yes, just like the country. It’s by far the dumbest thing you could do is name your child after a country (there is Apple Martin, Gwyneth Paltrow’s kid, and that’s pretty lame name as well) luckily he didn’t name this new child something like China. I bet Ireland gets bullied quite a bit at school or maybe not – with all of the money and power her parents have, and here being a budding model, she probably doesn’t get bugged at all.

Alec Baldwin really wasted no time with Hilaria having this second child – he’s only been married for a year but at his age (55) there isn’t much fertility left.  Hilaria, the consummate gold digger (pun intended) aged 29, was of course eager to lock in her lifetime support by bearing Alec’s child.  I have no idea when Alec decided that this marriage was going to last longer than his previous one but good luck to him. Still I can’t help but think another divorce could be on its way in the very near future. When Hilaria is 50 Alec will be 76 – LOL!