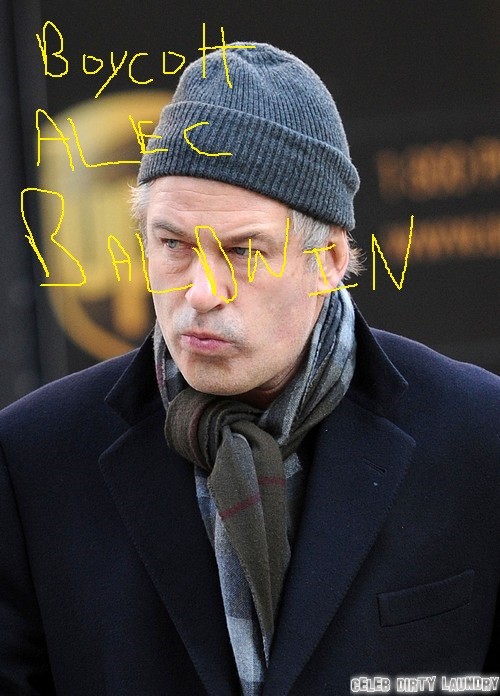 Alec Baldwin caused quite a stir with his over-the-top Twitter rant against Daily Mail reporter, George Stark. George claimed the actor’s wife, Hilaria Baldwin, was showing all signs of disrespect at James Gandolfini’s funeral when she grabbed for her cell phone to tweet or retweet during the emotional service.

Alec claims that what had been stated in George’s article was all a bunch of lies – but the way he approached the situation and confronted the writer through Twitter was absolutely disgusting and unacceptable.  Alec essentially called for the gay-bashing of the reporter! the 55-year old threw numerous homophobic slurs at George, such as “If put my foot up your f—ing ass, George Stark, but I’m sure you’d dig it too much,” which raises the question of why Baldwin can get away with these kind of comments.

Just over two weeks ago, the whole Paula Deen scandal came to light when she admitted to having used the N-word in the past during a private conversation she had. Since then, she’s lost her business deals with QVC, the Food Network, Wal-Mart, K Mart, Sears, and Home-Depot, etc., due to these businesses apparent need to distance themselves from any hint of racism. This is puzzling to us, because even though Paula’s now being treated like the biggest racist in America, she’s never used any kind of racially derogatory terms in public; she’s a very respectful woman who has been forced to plead for forgiveness several times – most recently on the Today Show – and yet she’s still being destroyed in the fickle court of public opinion and in the blogosphere.

Meanwhile, Baldwin shares his frustration publicly with the Daily Mail reporter by throwing the most insulting and inflammatory homophobic rant and by the look of the tweets he released it was clear that he didn’t give a damn who saw the comments – in fact he encouraged his followers to join in “I want all of my followers and beyond to straighten out this f—ing little bitch, George Stark.”  Alec was speaking from the heart, his rotten heart, what he truly felt.  And the fact of the matter is that Alec has the gall to do things like these because he’s never served any punishment or had any consequences for his vile actions.

The numerous fights with photographers, the dozens of times he has publicly had some kind of dispute with another celebrity – whether it’s in person or over social media – it was always heavily publicized, but there was NEVER a follow-up story saying Baldwin had been axed from this or that company, because quite frankly, it’s a sexist thing.  Woman seem to be held to a higher standard of behavior than men.

How can a grown man say something like: “I’m gonna find you, George Stark, you toxic little queen, and I’m gonna f—…you…up,” and still be adored by millions and keep his lucrative sponsorships and employment? How can a man of his age target a reporter who may have just been assigned to stir some kind of controversy with the article he had written? Most importantly with the recent overturning of DOMA by the US Supreme Court, how can a man with wife and children still feel that it’s acceptable to use disgusting homophobic slurs towards another person and call for his bullying?

Paula has suffered immensely from a word she used while people like Alec can be offensive, violent, and cruel whenever they feel like it and never get punished for their actions? As of yet, we have not heard one word from those paying for his numerous endorsement deals, and we probably won’t hear a thing either, because they don’t look at it like it’s a big deal, but turn the tables and put Deen in Alec’s shoes and it’s all of a sudden it’s the biggest shame?

All we have heard is a cowardly and hypocritical call from GLAAD (Gay & Lesbian Alliance Against Defamation) to forgive Alec because “he didn’t mean it!” What a bunch of BS!  Alec, who identifies as a ‘liberal,’ is given a free pass by the supposed defenders of the LGBT community after publicly going on a violent homophobic rant?  And what’s the ostensible reason for GLAAD’s pathetic stance?  Oh well Alec apologized and said his rant wasn’t technically homophobic and that he supports the LGBT community!  That’s like Chris Brown saying ‘I really love Rihanna’ after he smashed her face in.

As a society, we should look at ourselves and reconsider the way we judge others, because seeing people like Alec acting out in the way they do with no real consequences makes US look stupid. We need to shed our hypocrisy and stop tolerating bullying or hate speech from any celeb. If we band together and refuse to watch Alec Baldwin’s TV and Movies, and more importantly, we refuse to spend our dollars on anything the homophobic monster endorses, then we can make a difference.  Hit the bully back and hit him where it counts!