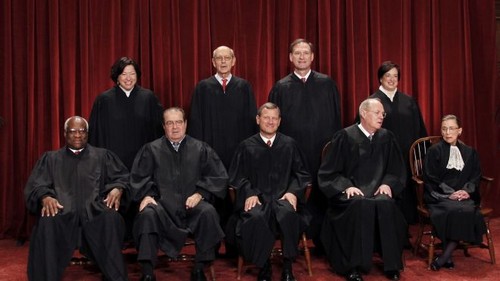 The Supreme Court is expected to hand down their final decisions on the case of two civil unions that have been pending for the last couple of months.

The details of the cases are as follows: “One of the civil union cases challenges the Defense of Marriage Act, defining a marriage for federal purposes as being between a man and a woman. The other covers the fate of Proposition 8, which California voters enacted to prevent state officials from moving ahead with issuing licenses for same-sex marriages.”

One gets the feeling that they were waiting until the last day of the court’s current term, which means that the decisions might be controversial. Well, whatever decision they make, it will be controversial. If they rule that the unions and marriages are legal, that will set a huge precedent for the future and pretty much legalize gay marriage on the spot. If they don’t – well, I can see a huge fallout from that decision, including protests.

California has had a long and complicated relationship with the issue of same-sex marriage, as has the US. Fifty years ago, it was not even a conceivable choice, but then again, inter-racial marriages were an issue fifty years ago. I hope that fifty years from now, we’ll be able to look back at this period of history and go, ‘Wow, did we really not legalize same-sex marriages?’

One can only hope, but the signs are promising. Sure, there are a lot of people against same-sex marriages, but these people are slowly becoming the minority.

What do you guys think the Supreme Court’s decision will be? Let us know whether you think they will rule in favor of same-sex marriages or against?