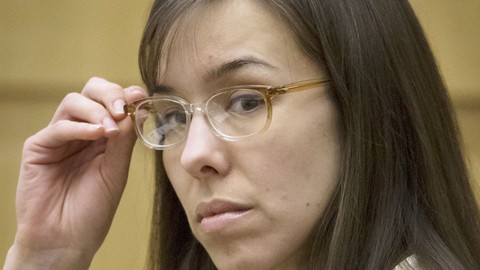 Jodi Arias has been convicted of the first degree murder of poor Travis Alexander! It has been pretty hard to miss the media circus over the last four months that has consumed court case junkies. Back in 2008 Travis was brutally murdered by Jodi in his home in Mesa, Arizona. He was stabbed 28 times, had his throat slit and he was also shot in the head for good measure, all admittedly by his on/off girlfriend, Jodi Arias. She had changed her story several times before admitting to the killing, insisting that it was self-defense.

The prosecution has had specialists argue that there is no way that a stabbed and sliced Travis could have had the mental ability to get up and go after Jodi. There’s also a friend of Travis’ who knew the layout of his home who insisted that if in danger Jodi wouldn’t run to the closet (as she said) but rather right out the door.

The case was handed to the jury last week and I think it’s expected that Jodi will indeed be convicted, but on what count has taken over the main discussion about this case. Jodi rented a car and had stolen a gun prior to driving to Mesa to visit Travis, which certainly helped the prosecution build a case for premeditated murder.

What will happen during the sentencing phase remains to be seen.