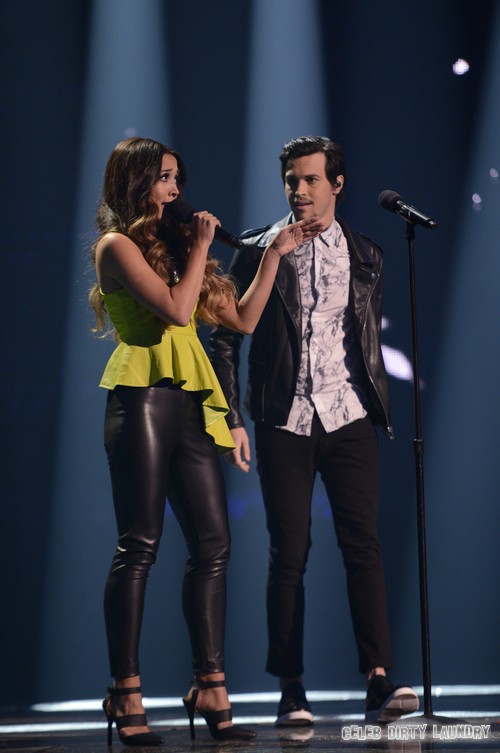 Alex & Sierra took the stage  on THE X FACTOR USA for their Top 4 Semi-final live performance for a song they chose to impress.  From team Simon Cowell, Alex & Sierra sang “Gravity”  by Sara Bareilles. On tonight’s show the top 4 performed live in front of coaches Simon Cowell, Kelly Rowland, Demi Lovato and Paulina Rubio for America’s vote and to make it to the coveted “Top 3 Finale.”  Did you watch tonight’s performance show? We did and we recapped it here for you.

Judges’ comments: “Kelly said that honestly she felt they were singing to her the whole time; first of all she didn’t expect they wouldn’t have such amazing vocals. Demi said that this is what they need to do; she feels that this is incredible. Paulina said that they said what she thinks; they did an amazing vocal together. Simon says that they saved the best till last; it’s exactly the type of record they should make. It’s impressive with how they perform to help each other so well; he is truly pleased with them and wants them in the finals.”

If you want Alex & Sierra to stay around another week you have to vote for them.  Right now it is anyone’s game and it is the last chance for the acts to impress.

On last week’s show Alex & Sierra performed “Say Something”  by A Great Big World and the judges had this to say about it, “ Kelly says that she felt like she was watching a performance at an award show; she just saw a really big light for them and that it’s where they shine the best. Demi says that both of them playing instruments is really organic; she loved how they never took their eyes off of each other because it’s so beautiful. Paulina says she is very impressed with how they both played instruments and loved that they are so different. Simon says that this for him was the best performance of the entire season; it was a record without a doubt. If you want to see Alex & Sierra make it another week, you have to vote for them.“