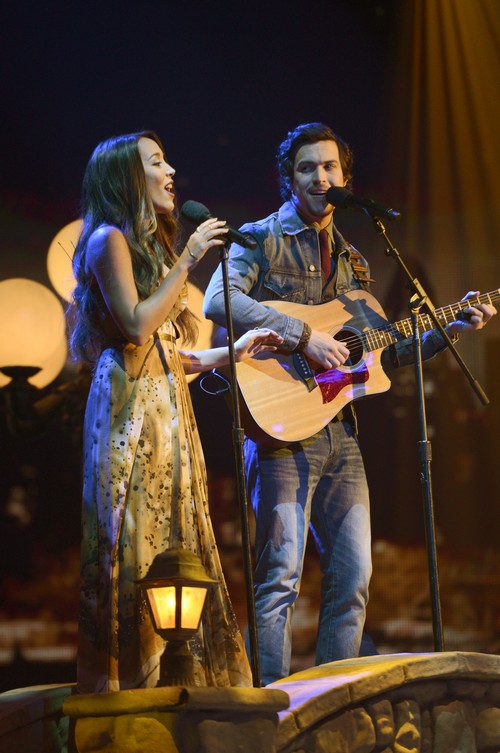 Alex & Sierra took the stage  on THE X FACTOR USA for their Top 6 live performance and Diva Week.  Alex & Sierra sang “Say Soemthing”  by A Great Big World for their second song. On tonight’s show the top 6 performed live in front of coaches Simon Cowell, Kelly Rowland, Demi Lovato and Paulina Rubio for America’s vote and to make it to the coveted “Top 5.”  Did you watch tonight’s performance show? We did and we recapped it here for you.

Judges’ comments:  Kelly says that she felt like she was watching a performance at an award show; she just saw a really big light for them and that it’s where they shine the best. Demi says that both of them playing instruments is really organic; she loved how they never took their eyes off of each other because it’s so beautiful. Paulina says she is very impressed with how they both played instruments and loved that they are so different. Simon says that this for him was the best performance of the entire season; it was a record without a doubt. If you want to see Alex & Sierra make it another week, you have to vote for them.

On last week’s show Alex & Sierra performed “I Knew You Were Trouble”  by Taylor Swift and the judges had this to say about it, Kelly said, “Sierra I heard you say that he is better about me.  Look at you honey you are a perfect 10.  I was not crazy about this version of the song.  You both sound great together.  Your personality shined though like the star like you are.”  Demi said, “You said you would know if people would love or hate it.  At first I hated it, but you guys made me love it.  It is so different from the original song.  You turned the song into your own.  You nailed it.”  Paulina said, “I love that type of trouble.  I love how much you two are in love.  There is no one like you on the market.”  Simon said, “The minute they heard the Big Band theme you guys chose this song.  I think you did a great vocal performance Sierra.”