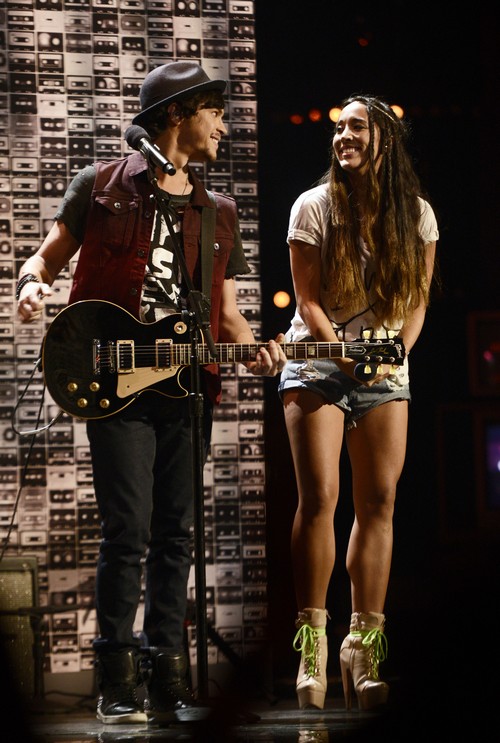 Alex & Sierra took the stage  on THE X FACTOR USA for  their Top 10 live performance and British Invasion Night.  Alex & Sierra sang “Best Song Ever” by One Direction. On tonight’s show the top 10 performed live in front of coaches Simon Cowell, Kelly Rowland, Demi Lovato and Paulina Rubio for America’s vote and to make it to the coveted “Top 8.”  Did you watch tonight’s performance show? We did and we recapped it here for you.

Judges’ comments: Kelly said,“That was such a different from last week it was so much better.  Alex you were so much better than Sierra.  It has to be spot on.  He nailed and you met it there.”  Paulina said, “I am one of the biggest supporter of you guys.  That bridge is a bit corny and I should emphasize that – you guys are good together.  We need to see more rock and roll.”  Demi said, “I have to disagree because I think this was your best performance ever.”  Simon said, “This was a brilliant performances, it was cool and laid back.  I thought both of you were amazing tonight.  That is a record, that is original and that is turning you into a recording artist.”

If you want to see Alex & Sierra make it another week, you have to vote for them.  Alex and Sierra took to twitter to thank their fans, they tweeted, “Just wanted to thank all of our friends, family, and new friends (our twitter babies) for all of the love and support you give us daily. <3.”