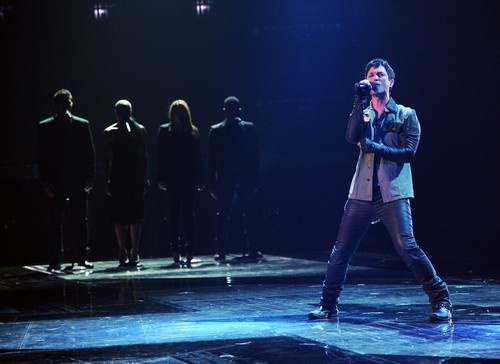 Jeff Gutt took the stage tonight on THE X FACTOR USA for the first of the live performance shows. Jeff sang “Say You Say Me” by Lionel Richie.  Jeff is on Kelly Rowland’s Over 25s team and they decided to sing this song for his Motown choice. On tonight’s show the top 12 performed live in front of coaches Simon Cowell, Kelly Rowland, Demi Lovato and Paulina Rubio for America’s vote and to make it another week. Did you watch tonight’s performance show? We did and we recapped it here for you.

Judges comments: Paulina says it was so unpredictable and loved the energy he bring to stage; she loved it. Simon says that when he saw the song choice he was nervous about it but felt it was the best vocal of the night and looked effortless; he’s doing very well. Kelly says she is in tears because of how hard it was for him, she is so happy for him and proud.

Jeff Gutt is back and better than ever and he is a  dad from Detroit. If you want to see Jeff Gutt make it another week, you have to vote for him.