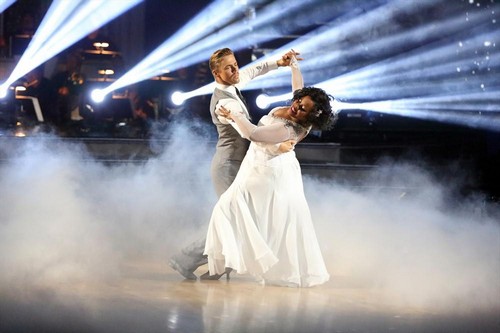 On tonight’s Finale of Dancing With The Stars the couples competed in three rounds of dance.  For the first round Amber Riley danced a Charleston for his “Judges Pick” and repeated a selected routine from earlier in the season.  Check out Amber’s DWTS bio [CLICK HERE] If you missed tonight’s show you can read a full and detailed recap, right here.

On last week’s show Amber was given a 40/40 for her Viennese Waltz routine.  Carrie Anne said this about her performance, “You brought me to tears. You are just something special Amber Riley..”   If you missed any of last week’s performances, you can check out all the videos, right HERE.

Judges comments: Carrie Ann “I am so proud of you, you out did yourself even though you started this competition at the top.” Len “This is the most improved by far out of all the dances.” Bruno “Your footwork was as a sharp as a razor blade tonight.”