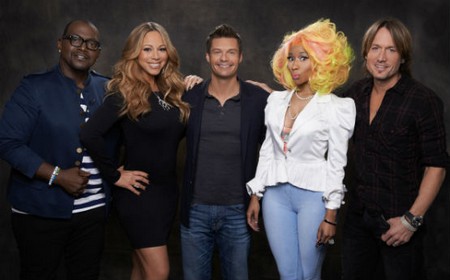 The day American Idol premiered for the first time on US television, audiences became enthralled with the acerbic format and the “sudden death” elimination process. The show’s international counterparts became highly successful and iconic in their own right, but none as much as the American version of Simon Cowell’s ex-Pop Idol brainchild. During the first season of Idol, the show was a “ghetto version” of what it is today. It slowly matured throughout the gamut of its debut, and after Kelly Clarkson’s win, American Idol became the most important show in pop culture history. The three judges – Simon Cowell, Paula Abdul, and Randy Jackson – exploded in the entertainment industry as the three most loved personalities on television. American Idol steamrolled its competition and placed a fat punch in the stomach of reality TV. It was new, it was fresh, and it was so damn addictive!

Several seasons later, the format was adjusted to freshen up the show a bit, and new twists and turns were added to make Idol a more enjoyable and more addictive experience. Not all of the show’s winners became superstars, but those who did, never once looked back. Each and every season, the producers of Idol entrusted its audience with voting for their favorite contestants. This method of 50% interaction and 50% fate became an international addiction. We could decide who we wanted to be the next music superstar. We were in control of the contestants’ fates. We were in control of their dreams, their aspirations, and their careers. This was a massive responsibility, and although voters overshot the mark several times, we still hoped and believed that our favorite would stick around for another week and another week and another week…

After unfathomable success, something happened to American Idol. The show lost its balance and crashed into the clichéd contestant pool of no name wannabes. The judges lost their wit, and the contestants became caricatures of a show that once taught us how to dream. The judging panel was reshaped in the 8th season of the show when Kara DioGuardi joined the panel. Her presence brought an interesting dynamic to the famous “three judge” panel, and forced the show to reconcile with its audience. Unfortunately, as the show neared its ninth season, the weight of the tired formula ripped the show apart and made it a husk of its former self. Simon Cowell left, Paula Abdul packed her bags, and Kara DioGuardi headed to the nearest exit. This massive loss wounded the show and left it licking itself in the corner of production brainstorming.

In the tenth season, Jennifer Lopez and Steven Tyler joined Idol alum Randy Jackson. The show also moved over to a more personal approach when Jimmy Iovine was introduced as the main mentor and head honcho. The show fared fairly well with this new judging panel, but audiences started tuning out in their droves – they blamed the sentimental wish-wash and the nonsensical one-liners as the reason why the show was busy failing. In the 11th season, American Idol went on life-support and struggled to survive under the weight of X-Factor USA and The Voice. The season ended with an extremely predictable win in the form of Phillip Phillips, and audiences started to ask, “What now? How will the show improve if it is already so low on the popularity rung?”

Enter 2012 – the year Mariah Carey, Nicki Minaj, and Keith Urban joined Idol veteran Randy Jackson on the judging panel. During the audition process, rumours leaked from the PR department that Minaj and Carey had a “bitch fight”. Our ears perked and we listened intently to the gossipmongers working behind the scenes. The fight, cleverly constructed by the PR department, became widely – but not officially – known as a faux and manufactured set piece to draw new viewers to the show. This was the beginning of the end. Not only did this “move” show desperation in the production department, but it also carved out an irreparable wound in the skin of our favorite talent show. Several episodes later, the show reached an anti-climactic and caricatured phase of competition. The judging panel is forced, the rehearsed one-liners are ridiculous, and the blemished personalities of Urban, Minaj, and Carey only proves that Idol has reached a point of no return. The last nail in this entertaining coffin was when the judges rose up from below the stage like porcelain dolls at a David Copperfield appearance. It was absolutely and utterly preposterous.

The latest season drags along the failed bumps in the road to television history. There’s no hope, whatsoever. The contestants are unorthodox, idiosyncratic, and suffer from emotional apathy. The talent pool is filtered and lukewarm, the song choices are clichéd, and the show’s desperate attempt at emotional vulnerability is becoming just too much to bear.

There’s a very, very fine line between kitsch production development and desperation. Unfortunately, Idol is suffering from both of these negative qualities. A show’s success is not based on what it means to the entertainment industry or how audiences interpret the show; its success is based on viewership numbers and popularity. Idol’s decline in the latter proves that the latest season will become a one-hit wonder in the grand scope of reality television. Yes, it might boost the careers of the judges, but in no way will it ever have the same impact as Idol’s premiere season.

If we were to sum up Idol’s legacy in one sentence, and engrave it on the show’s ultimate epitaph, it will read:  “There is no real ending. It’s just the place where you stop the story.”