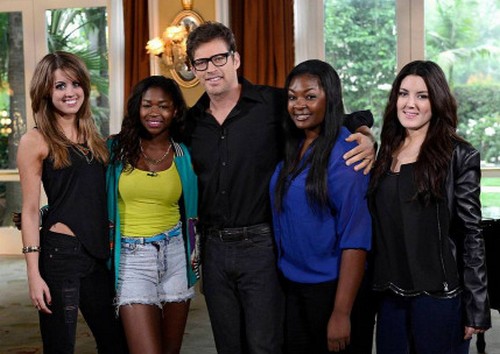 Thank you Harry Connick Jr. He was value-added not just for the singers, but he added much needed energy to an otherwise stale season. If we learned one lesson on American Idol it’s this: bring the mentors back. They enliven and change things up for the better. They have noticeably been missed.

Harry Connick Jr. has revealed that he has been approached to become a full time judge on the next season of American Idol. This would be a great move by Idol to replace current judges by people with real talent and proven longevity in the industry worldwide. Connick is an American singer, conductor, pianist, actor, and composer. He has sold over 25 million albums worldwide. Connick is said to be among the top 60 best-selling male artists in the United States.

Idol needs new talent to breathe life back into this sinking ship. Connick, a serious artist was seen looking outraged and obviously not in accord with Randy Jackson . The famous crooner came down to do battle with Randy Jackson at the judges’ table over Kree Harrison. Connick stated that “I think you need to be completely honest, and I think you need to be diplomatic. I think there’s no reason to be mean, but it is called being a ‘judge.’ You have to judge. That’s what you do.”

Connick hit the nail on the head for IDOL. This is a talent competition that requires judging and Idol is completely missing the mark in this respect – which is reflected in the poor ratings. Connick’s new and fresh approach would receive a warm welcome from all the mundane and pointless remarks made by all the judges. If we cared about competitor’s looks and outfits then we would watch America’s Next Top Model but IDOL is supposed to be about talent and the judges just are not getting it this season.

Randy “DOG” you know what we are saying when we say sorry but your time has come and gone on IDOL. Idol briefly terminated you last year before allowing you to return this season but I think this year your departure should be permanent – at least if IDOL has any chance of surviving. IDOL needs to do a complete overhaul to continue to compete with real talent competitions like the VOICE.