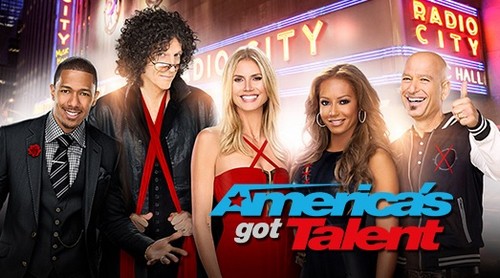 AMERICA’S GOT TALENT returns this evening with a whole new season and two new judges.  Sharon Osbourne left the show, not because of the show, but she was upset with NBC.  She accused them of discrimination for eliminating her son, Jack Osbourne, from the line-up of Stars Earn Stripes.

Tonight’s eight season opens up with judging regulars Howard Stern and Howie Mandel. Model and television host, Heidi Klum joins the judges this season with former Spice Girl, Mel B. Host Nick Cannon is back with a whole new line up of contestants from all over America who are vying for the one million dollar prize and a chance to headline a show on the Las Vegas strip.

Official Synopsis: The talent contestant’s eighth season opens with auditions in New York City, Lost Angeles and San Antonio. Mel B., Heidi Klum, Howard Stern and Howie Mandel are the judges.  The show is just started and rumor already has it that Heidi Klum hates Howard Stern, find out the details, CLICK HERE!

NBC has fine tuned it’s talent for this eighth season; which means we have a lot to look forward to. There will be an 11 year old break dancer, swinging seniors (always love them) and a 9 year old brother and 6 year old sister that play drums and sing (rumor has it they scare Scarey Spice). Yet, scarier than that young act, all these people make it to the next round!

One of the “hottest” moments this season, or any other season for that matter, will be when Howie joins in with a contestant who eats the hottest pepper in the world. One thing is for sure, with all these amazing judges and a bevy of talented and odd acts, this is going to be a terrific season.

We will be live blogging America’s Got Talent Season 8 Episode 1 at 9PM EST . . . so make sure to come back to this spot and watch the two hour show with us. Make sure to refresh often so you get the most current info! While you wait for the episode you can catch a sneak peek of tonight’s episode BELOW!