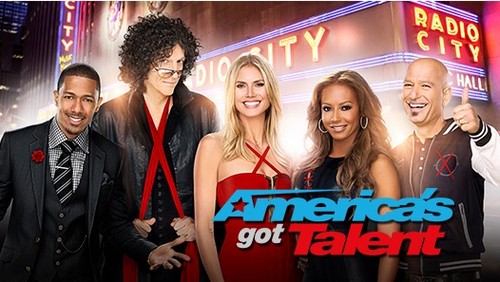 Tonight on NBC their hit reality talent show AMERICA’S GOT TALENT continues with its finale and on tonight’s show host Nick Cannon will reveal who has been chosen as the most talented act in America and award the $1 million prize.   Did you watch last night’s episode? We did and we recapped it here for you.

On last week’s show we got to the final night of performances from Radio City.  The six finalists: Cami Bradley, Collins Key, Forte, Jimmy Rose, Kenichi Ebina and Taylor Williamson gave it their all for one last shot at AGT’s million-dollar prize.  Last night was full with pure talent, and America has a tough decision to make.

We will be live blogging America’s Got Talent finale . . . so make sure to come back to this spot and watch the one hour show with us. Make sure to refresh often so you get the most current info! While you wait for the episode let us know who you are rooting for tonight!

RECAP: We get a recap of the finalists last night, seeing all our finalists react to each others acts while they were in the back watching one another perform their final acts.

First up to take the stage is The Rockettes with a new number; they are Radio City legends. We take a look at the finalists in the Orville lounge, Nick talks to each contestant and parties with them eating lots of popcorn.

The next special act on stage to perform is the duo Icona Pop performing their two latest singles.

We take a look at the life of the judges behind the scenes, Howie didn’t shower because a of a water contamination in one of the cities and it scared the hell out of him. Howie was a practical joker behind the scenes, they each made fun of each other. Howard says he was sick of how much Howie is on Twitter, we also get a little recap of Howie and Howard kissing.

Now singing with Cami Bradley is Gavin Degraw with his song “Best I Ever had”.

Next up is Kenichi Ebina with Il Devo and Heather Headley; combining their vocals with his dancing. One of the members of Il Devo told Kenichi that he’s so graceful and kind of reminds him of Michael Jackson.

Next it’s Taylor Williamson with James Lipton; host of Into The Actors Studio which is one of the weirdest collaborations of all time.

We now get a look at all the awesome things Nick Cannon did with all the contestants; Jame Lipton calls him the unsung hero of the show because of his dedication. We get a complication of Nick Cannon doing some crazy things for the show; Nick Cannon says AGT is the best job he ever had getting to have fun and watch people reach their dreams.

We see the judges and contestants at a hotel together at a party for making it into the finals; the judges talk with them all and they share some good moments.

Next up is Forte performing with Josh Grobin as their special guest.

Performing on stage now is Jimmy Rose alongside his hero Dierks Bentley singing “I Hold On”. Dierk says that Jimmy is representing country music so well and that he’s a great guy.

We get a recap showing off how all the contestants felt like auditioning for the show in the beginning; right from the beginning to where they have got to now.

Next performing on stage is the legendary Earth Wind and Fire!

The first act to be eliminated from the finals of America’s Got Talent is Cami Bradley. Cami says she is so grateful to be here and have the chance to compete with such amazing contestants; Howie tells her that her dream is just beginning and she is a major star.

The second act being eliminated from the competition is Collins Key. Collins says that this has been the best experience of his life and it’s only the beginning of his dream and he’s so excited for the future. Howard says he’s impressed with how calm and collective he is with the news and is very proud of him.

The third person eliminated from the competition is Forte.

Forte says it’s amazing having getting the chance to perfom on stage from being nobodies; Heidi tells them she is sorry for them no winning and will follow them anywhere they go.

Next up with his smash hit is Luke Bryan performing live on stage.

The next person leaving the competition is Jimmy Rose. The final two standing are the talented Taylor Williamson and Kenichi Ebina; we now take a look at Jimmy Rose’s time on the show.

Jimmy says it’s been a crazy but humbling experience; he loved being able to prove that it doesn’t matter where your from or who you are, you can always chase your dreams. Mel B says that she inspired him and releases her new song tomorrow; she will really miss him.

Howie says that they have never had such brilliant acts as finalists ever, he wishes they could both win and believes both their lives have changed forever.

We have a recap of both of the final twos journey to reach the finals.

The winner of America’s Got Talent seaons 8 is Kenichi Ebina!!!!!!