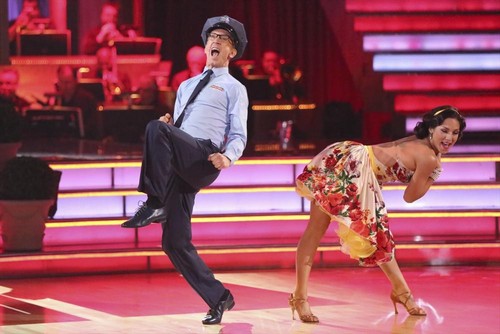 ANDY DICK danced a RUMBA on the seventh episode of Dancing with the Stars: 2013 performance show tonight.  On this week’s show the seven remaining couples hit the dance floor for the ever popular, Latin Night.   The couples will perform to a Latin-inspired hit.  If you missed the show, we recapped tonight’s show for you and if you want to see how all the couples did go HERE!

Judges comments: Len: “Any I like the fun and the entertainment value, and I like the enthusiasm. There was not enough hip movement.  As always I enjoy you. “  Bruno:  “You have taken an unforgettable dance and now I wish you could forget it.  At the moment you do steps.  It is not enough to do the feet and hoping for the best.”  Carrie Ann: “You touch us, I know you want to improve, work on making the arms consistently part of the dance, than may change things.”