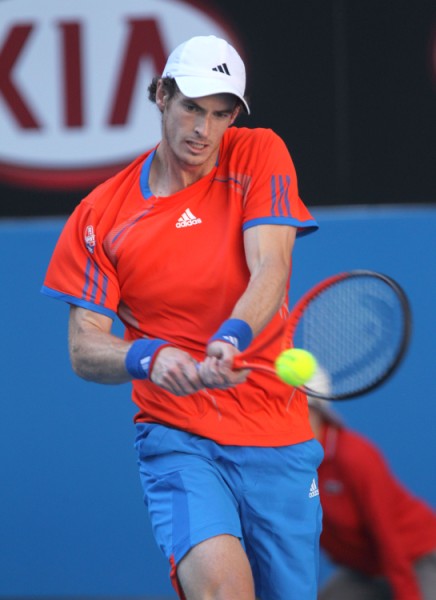 It seems only fitting that on 7/7/2013, a Brit should reclaim the Wimbledon crown after 77 years. Today Andy Murray finally put a nation out of its misery and won Wimbledon. The Scot became the first Brit to win the tennis championship since Fred Perry in 1936. He beat world No. 1 Novak Djokovic in straight sets.

The match seemed like it was comfortably in Murray’s hands from the very beginning. Not only did he have the enormous home court advantage but Novak was coming off a grueling 5-set semi-final match against Juan Martin del Potro that left him noticeably fatigued.

Andy won in front of a host of British royalty including Princess Michael of Kent and Victoria Beckham. Gerald Butler was also sitting with buddy Bradley Cooper who brought along his twenty-something model girlfriend, Suki Waterhouse. Oddly enough, there were no Middletons in sight. Now, this would REALLY piss me off if I was Pippa Middleton. On any other year she would probably go the championships if her sister wasn’t married to the heir to the throne. She might not sit in the royal box but, let’s face it, her seats wouldn’t be horrible. But she had to opt out of this MOMENTOUS occasion most likely because she’s already sat in the royal box twice this tournament AND she went to the championships last year with her sister. Doing it again would only incite the haters. This would be the straw that broke the camel’s back for me. I can get you telling me to stop being a famewhore. I can delay my engagement for your baby BUT making me miss Andy Murray win Wimbledon because you’re afraid of the attention I’d cause would annoy me to know end. It’s history for christ’s sake!!

Oh well, let’s not make this about Pippa (although you know I’d love to). Congrats to Andy Murray. He just made history and probably scored himself a knighthood. Not bad for a day’s work.