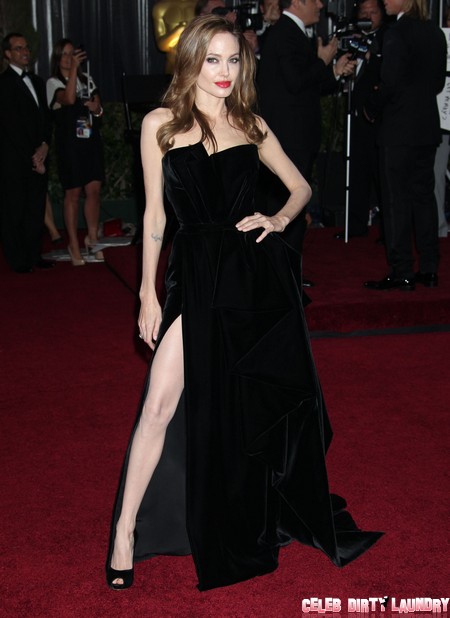 Angelina Jolie: Girl Gone Wild is a headline that tabloids simply cannot resist. It doesn’t matter that she’s now a mother of six or engaged to America’s most eligible bachelor [after George Clooney, of course], it only matters that her name sells. And Angie sells best when she’s seducing men, not when she’s happy at home with her family. Thus, we present the National Enquirer’s latest headline, “Flirty Angie Parties With Hunks.” Ooh, Scandalous! Angelina Jolie went to parties while Brad Pitt was away, and she spoke to men! How dare she, the wench!

Because really, that’s what the tabloid report is insinuating. A ‘source’ tells the National Enquirer, “Angelina Jolie’s tired of being left behind with six kids while Brad Pitt travels the world — so she kicked up her heels in Los Angeles during his recent trip to France! Angie decided she needed a break — and cut loose.”

The Enquirer gives details about Angelina’s visit to the Malibu fundraiser, saying that she flirted up a ‘storm’ with Ben Affleck and other handsome ‘hunks’, and “Angie was lapping up the attention. She didn’t appear to be missing Brad one bit and kept the party going past midnight.”

Translation: Angelina Jolie went to parties, spoke to people she’s been friends with for the past decade [at least], and then went home before the wee hours of the morning. I swear, the Enquirer’s headlines have been getting dreary of late. I almost want to hire a better editor to have them spice up their headlines and stories, because they sure as hell aint getting all this from an actual source. A source would have made all that sound a lot sexier than it just did.

Angelina and Brad are getting married – and I think we can all agree that it’s going to be soon. I’m not saying that they’re going to stay together forever, but if Angie were to cheat, she would have done it by now. Again, not saying she won’t in the future, but give the women a break. This is the person who managed to steal away Brad Pitt from Jennifer Aniston, for goodness sake. You think she would be so stupid as to flirt up a storm with mostly married men in front of a bunch of people at a fancy Hollywood fundraiser? No, that’s definitely not Angie’s playbook. And the Enquirer would know that if they weren’t so damn lazy.