Angelina Jolie and Brad Pitt Battle Over The Children: She Says No To Hollywood! 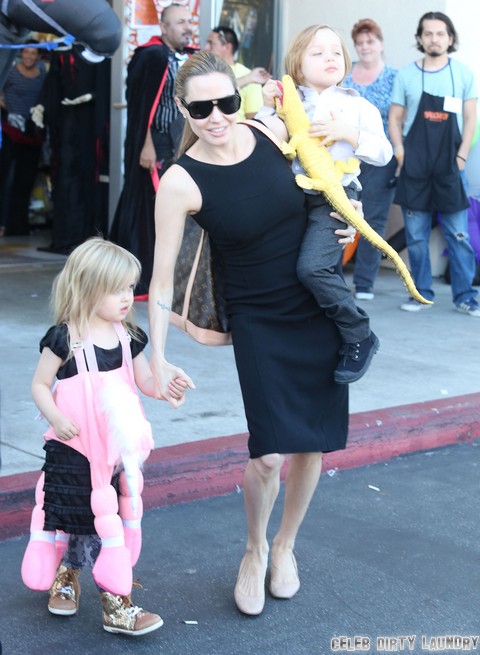 It wasn’t too long ago that Angelina Jolie was super excited to have her daughter cast in a film beside her. Back then Angie thought that her kids should be able to do as they please and if Hollywood was where they wanted to be then it was fine with her. Fiance, Brad Pitt completely agreed and the couple was completely in sync on how to handle the kids wanting a bit of limelight for themselves.

According to the July 15th print edition of Star magazine that is no longer the case. Angie’s mastectomy has really made her rethink everything, especially how to raise her kids. 11-year old Maddox had a role as a zombie alongside of Brad in World War Z, but Angie insists that the kids are finished with acting- at least until they’re much older.

Brad still thinks that their six kids should be encouraged to follow their bliss and Angie agrees, as long as it doesn’t include Hollywood aspirations. She has done a 180 in her parenting and suddenly Angie is becoming a bit more traditional. Whereas before she wanted to hopscotch the globe, she now is really valuing her time at home with the family. She also wants her children to enjoy a more traditional education and now would rather raise doctors and politicians rather than decadent Hollywood snobs.

It’s quite a change for Angie, don’t you think? I guess I can see how her health crisis could easily have shaken her to the core and made her reevaluate her life and how she lives it. Do you think she will stick to raising more normal kids or is this just a knee jerk reaction to having a medical crisis? Tell us your thoughts in the comments below!