Angelina Jolie & Brad Pitt Secretly Married In Turks and Caicos! Is This Her Wedding Band (Photo) 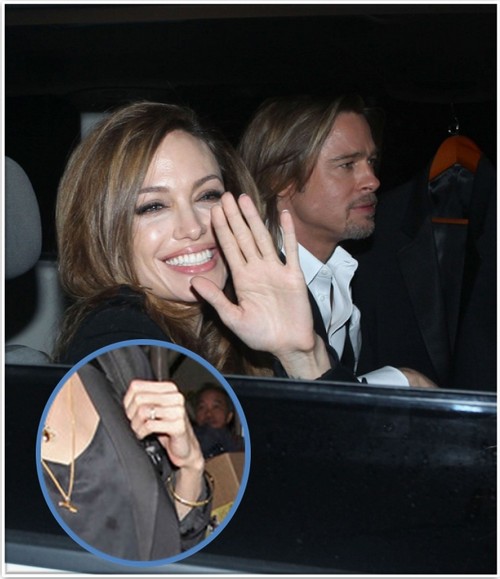 Hmmm…are Angelina Jolie and Brad Pitt hiding a secret? The paparazzi snapped a photo of Angie on March 22 at LAX wearing a plain ol’ gold ring on her “married” finger! That’s a far cry from the humongous engagement ring designed by Robert Procop. That ring was no where to be seen. This only leads to one conclusion. Did she tie the knot with Brad?! Where was our invite?! Did it get lost in the mail? We want to see the gorgeous wedding gown! Let’s hope that wasn’t the case!

MAYBE she just left her huge rock in a safe? She was heading to the Democratic Republic of the Congo and Rwanda to raise awareness about sexual violence in war zones. They’re not the safest countries to travel to. That’s what we heard! But it can’t be that dangerous. She’s traveling with the British Foreign Secretary and a bunch of journalists. We’re sure there will be some sort of security hanging around. So there shouldn’t be any fear of theft. That engagement bling should be safe. But maybe Angie doesn’t want to flaunt her wealth in front of others. Because we all know her as, you know, so altruistic.

According to reports, Brad bought wedding bands from Neil Lane three days after Thanksgiving. It may well be the ring Angie is sporting right now. When there’s fire, there’s smoke! And there were also reports that Brangelina married in Turks and Caicos on Christmas day. Perhaps the truth is finally out. Reportedly Brad’s parents, brother and sister were spotted at the Parrot Cay estate along with 12 nannies. If that isn’t a wedding, we don’t know what is! How did they manage to fly under the radar though? They’re hounded by the paparazzi 24/7! Not one photo was captured! What’s up with that? Boo!