Angelina Jolie Versus Khloe Kardashian: Who Is Better In Bed? 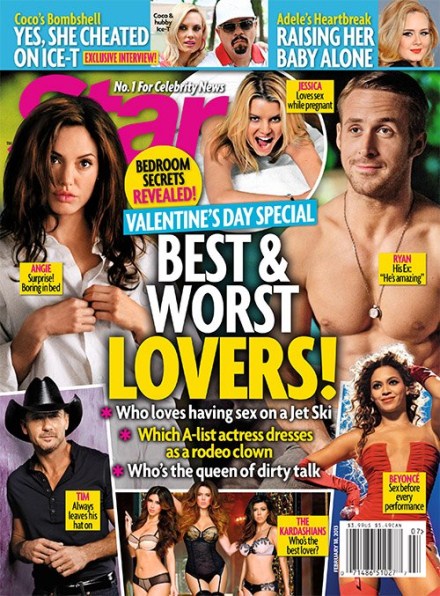 Who could believe that Angelina Jolie is crap in bed, Jessica Simpson is hooked on sex during pregnancy, Beyonce makes love to Jay-Z before every show while Ryan Gosling’s ex-girlfriend says he knows how to work that stick in the bedroom department. Y’all got to catch the latest issue of Star magazine – they are dishing the dirt of some of your favorite celebrities and their private lives.

In the newest issue – February 18th edition – the mag claims that Beyonce has sexual intercourse with husband Jay-Z before she goes on stage to bring out her inner Sacha Fierce. Oh – so that would explain why Beyonce sucked so bad at Sunday evening’s Super Bowl halftime show… she didn’t get no loving from her hubby.

Meanwhile, Ryan Gosling is AMAZING in bed! Yup.. AMAZING! The 32-year old actor who has been voted ‘Sexiest Man Alive’ in previous years, doesn’t seem to disappoint when it comes to making making love to his girlfriend(s). One of his ex supposedly dished to Star that when she and Ryan would get intimate, the former Disney starlet would turn into a “wild animal”, before revealing he’d leave her sore for days.

Angelina Jolie was a hot topic in the mag’s latest issue when it was revealed that Angie fails to satisfy her men in the bedroom. Surprise that Brad Pitt is still with her after all these years, don’t you think? Well, it seems like it may all come to an end soon. The actress’ insecurities about her body has driven her crazy, she’s constantly reminded about the fact that Brad could still have feelings for his ex-wife Jennifer Aniston who is said to still have extremely strong connections for him too. Jolie believes that because Brad has been together with Angie for so long he wouldn’t want to ruin their marriage, but she’s terrible in bed which is why he happens to fantasize about Jen Aniston when he’s making love to Jolie! Wowza!

The Kardashians never miss a week without being on the cover of a tabloid magazine and this week’s hot topic with them is: who is the best in bed? It will probably shock you when we tell you this, but according to Star, Khloe knows how to please her man when it comes to making that good, sweet love. The reality star, who has been married to NBA baller Lamar Odom for three years now, has many different fetishes – as seen on their reality show Keeping Up with the Kardashians. Khloe likes using ***** and to ooze melted chocolate all over her body while Lamar (who loves eating candy) will *********. DAYUM!! Last year, Rob Kardashian told his Twitter followers how much he loved watching Khloe make love to Lamar, saying: “i f**king love watching @khloekardashian and @reallamarodom have sex!! I have a pep hole and watch all night long,” while Khloe responded with: “Oh yeah.”