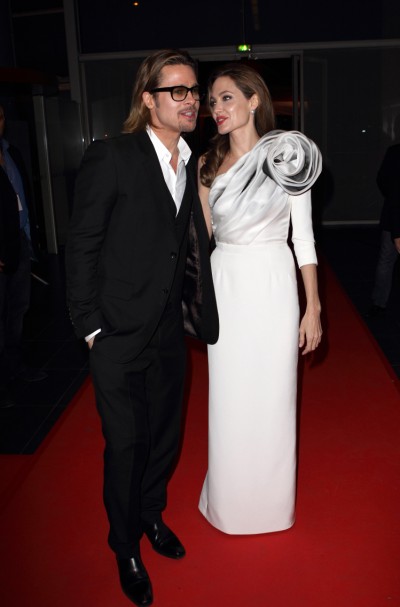 Angelina Jolie’s been through a lot lately, including a preventative double mastectomy and the death of her aunt. However, Angelina won’t be able to attend this aunt’s funeral because, get this – she will be busy promoting World War Z in London with Brad Pitt.

Now, I’m an Angelina fan. I think she’s a fantastic humanitarian and a really generous person, and I think she genuinely cares about all the causes she supports. She’s proved it time and time again, and that’s something that’s become fused with her public image. HOWEVER, and I don’t say this lightly, Angelina Jolie and Brad Pitt play the media more than anyone gives them credit for. They do a great job with it and half the time, people don’t even notice, but they are strategists first and foremost. How do you even think ‘Brangelina’ came about? You think either Brad or Angelina would be half as famous as they are now without each other? They know exactly when to do to capitalize on public attention.

Now, Angelina’s announcement of her double mastectomy was certainly suspicious, considering the release of Brad’s ‘World War Z’ next month. I mean, she could have just kept it private, right? Why announce it at all? However, I’m willing to give her the benefit of the doubt on that end because it was inspirational and it did bring a lot of attention to a procedure that’s often not discussed in public.

However, her not attending her aunt’s funeral isn’t something I can get behind. Angelina has always talked about how much her family means to her, and she’s openly spoken about her aunt being ‘inspirational’. Now, your aunt’s just died because of cancer, the very thing that your mom passed away from, and you can’t go to her funeral because you have to attend a premiere? I get that it’s the world premiere, and World War Z has a huge amount of risk riding on it. The studio needs ‘Brangelina’ to come and sell the movie, not just Brad Pitt. So yes, Angelina’s skipping a family member’s funeral for a movie premiere – which can’t be condoned, no matter the movie.

However, I know exactly what Angelina supporters will say. She probably wasn’t even that close to her aunt, etc etc. And while that may be true, I still think that putting a movie premiere over a family funeral – doesn’t matter which family member – is no bueno. This is the movie star Angelina we’re seeing, not the humanitarian Angelina we’ve grown to love. I hope the tabloids are wrong on this one.