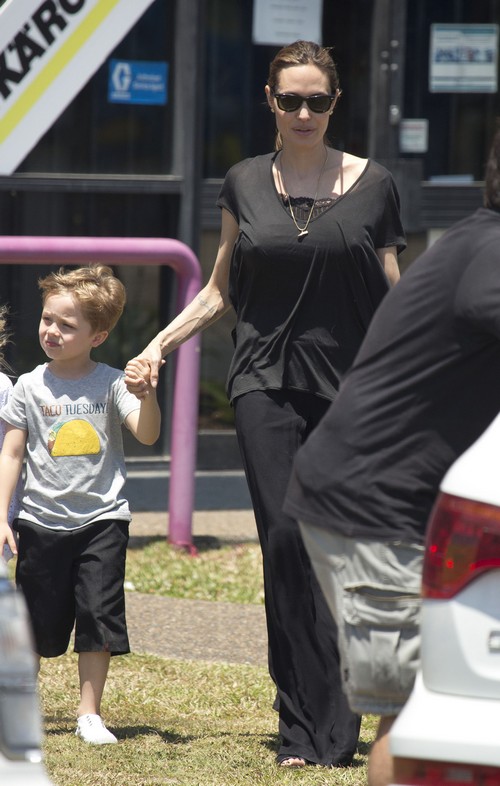 Is Angelina Jolie pregnant once again? Yes, I know she’s already gotten pregnant twenty times this year, according to the tabloids. But Angelina has been spotted out with her children in Australia [where she’s filming Unbroken], and she’s wearing the most hideous pants in the history of pants. Not only that, but they seem suspiciously loose, as does her shirt.

So what, you might say. Angelina has a particular fondness for hideous, tent-like clothing and that’s hardly a smoking gun. Well, fine. But there’s also the matter of the weight gain. For someone like Angelina, looking like she’s about to starve seems to be a specialty. The woman never looks anything heavier than 110 pounds, even when she’s wearing her usual range of tent and sack dresses. And right now, she definitely looks healthier than she usually does.

Again, the weight and the clothing could just be for comfort. I mean, she’s directing a movie, not acting in one. Most directors will tell you that they often stress eat, and worrying about their weight goes right out the window. Why do you think most of the best directors seem overweight, or generally unhealthy? Anyway, Angelina would never completely let herself go to waste [Brad Pitt would dump her in a hot second], but the stress of the movie might be getting to her.

I definitely still think there’s something suspicious about the way she’s strategically hiding her stomach in several of these pictures, but hey, maybe she just felt bloated and didn’t want the public to start talking. Too late for that, it seems.

What do you guys think? Is Angelina pregnant? Let us know your thoughts in the comments.