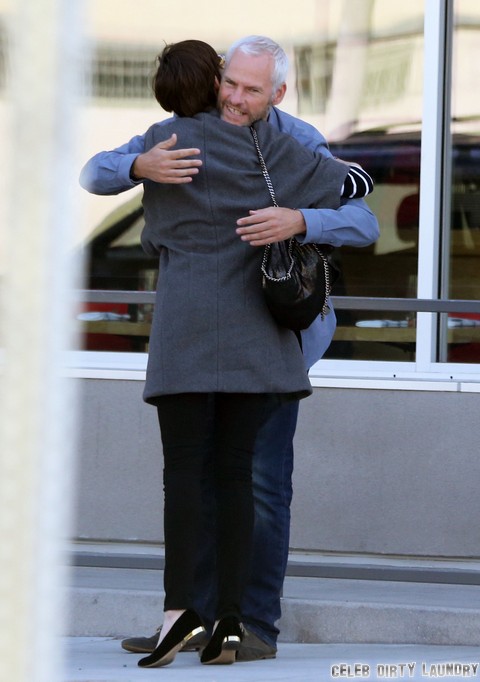 She was unwaveringly dedicated to her Les Miserables character Fantine—going so far as to drop two stone and shave her head—and now Anne Hathaway is mimicking her promiscuity too! (Too be fair, Fantine had to become a prostitute to pay for her daughter’s boarding.) Anne, who just won Academy Award for Best Supporting Actress (and took her costar Amanda Seyfried to town for ruining her Valentino dress), was just caught with a man definitely not her husband, and we have the pics to prove it!

Anne and hubby Adam Shulman were all lingering stares during the Oscars—Anne even thanked him in her speech gushing: “by far the greatest moment of my life was the one when you walked into it. I love you so much.” So what’s happened in the last week that’s got Anne roaming Venice, California with a random elderly gentleman? The lunch date isn’t questionable—we all meet with non-spouses for normal, healthy social interaction. But what’s with all the lingered hugs and awkward kisses?

The actress grabbed lunch with the mystery man before stopping into a store for some cleaning supplies. Unless this man is in the trade, why drag a friend along on such a mundane errand? When I go out with friends, I try to keep it fun and save the chores for later. And though she may be peeling away from her 5-month hubby, Anne is clinging to her vegan diet and we’re sure she enjoyed the food of Café Gratitude, where they dined.

Anne doesn’t seem like the wandering type, and I think there has to be more to the story than these pictures. Of course, Anne has been criticized for rocky social skills, sothe explanation could be as simple as longtime friends who are a bit European on the kissing habits, or maybe it was awkward for her too? Like she went in for a cheek kiss, he wasn’t expecting, and that weird head situation happened? I love Anne (and wept quietly the whole way through Les Mis!) and hate the thought that her marriage is unhappy. She’ll always be Mia Thermopolis, and don’t we all want the movie happy ending to follow her into real life?