Paula Abdul and Arsenio Hall: Couple Dating and Back Together – Report 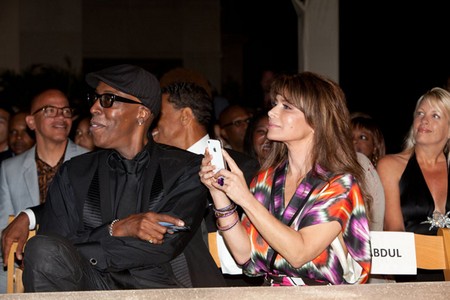 Sometimes you have to leave something good and move on from it in order to realize that you should have stayed put in the first place and that seems to be exactly the case for Arsenio Hall. In case you don’t remember him, Arsenio was THE late night man from 1989-94. His show was crazy and everyone watched it religiously. Back then he was dating sweetheart Paula Abdul who herself was riding the rainbow of fame. They were adorable and Arsenio has always insisted that no matter what transpired between them, Paula is his girl and he loves her to death.

According to the May 20th print edition of National Enquirer, the couple is back together again and this time around, Arsenio is sure he’s going to do things the right way. They have given this relationship thing a couple spins over the years but supposedly now Arsenio has come to accept that his life is infinitely better with Paula by his side.

His career is better too. Paula convinced Arsenio that now is the time to come back to the talk show circuit and after making some phone calls on Arsenio’s behalf, he got a new gig. Arsenio’s new syndicated show will be debuting Sept. 9th and he fully expects to have his lucky charm by his side.

In the meantime the two were recently spotted taking in an L.A. Dodgers game and looking happier than ever. Paula seems to have a history of choosing the worst guys possible, with Arsenio being one of the few exceptions to the rule. Do you think that maybe this time will be the real deal for Arsenio and Paula? Might they actually make it down the aisle? Tell us your thoughts in the comments below!