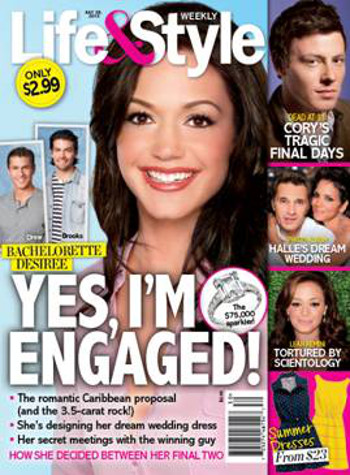 Bachelorette Desiree Hartsock has narrowed down her groupies to just three lucky players: Brook Forester, Chris Siegfried, and Drew Kenney. Each of these wayward gents would make a great match for our girl Des, but real talk: We have our radar pointed at Brooks, as the chemistry between him and Des is undeniable.

As many of you already know, Bachelorette Desiree Hartsock made her final pick months ago. The question is, is Desiree still with the person she chose at the final rose ceremony – or is their relationship in trouble already (like every other Bachelor and Bachelorette when their season was airing).

According to Life & Style, “The proposal, filmed for the final episode, which airs on Aug. 5, took place on top of Dow’s Hill at the Verandah Resort & Spa, surrounded by lush greenery and flowers on the island of Antigua and the man who stole Des’ heart got down on one knee and proposed with a cushion-cut 3.5-carat Neil Lane diamond and platinum engagement ring, worth $75,000.”

Many hope that Desiree picks Brooks Forrester in the end. However, like every short lived courtship produced by this franchise, Desiree could soon realize the man she fell in love with during the show may not be as perfect as she was led to believe.

Desiree’s brother still believes his sis may get her heart broken and if past Bachelorette failures are any indicator of Desiree’s pending happiness then she might want to listen to her brother.

Will Desiree and Brooks be together forever after The Bachelorette 2013? We definitely hope she chose Brooks. If so, are the two still engaged and reportedly still in love? Do you think that these two have what it takes to actually make it down the aisle? We doubt it but we are all waiting to see what the outcome will be for Desiree. Tell us if you think Des should pick Brooks as her future husband! If not tell us your choice and why! If you want to be spoiled, CLICK HERE for Bachelorette 2013 winner.