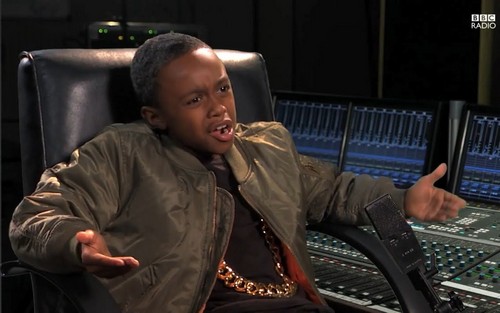 I don’t think a week goes by where we aren’t hearing about Kanye West losing his mind over something. I used to wonder why he was dating Kim Kardashian but after his most recent interview aired on the BBC I realized that it’s really Kim that chose the short stick here! Why? Because this clown is beyond stupid. When he tries to make his points he sounds almost childlike and apparently I’m not the only one who thought so. Jimmy Kimmel reenacted Kanye’s interview using two children and the end result was actually better than Kanye’s original finished product! The kid sounded a whole lot smarter than the idiot declaring himself Yeezus.

Of course Kanye, proving exactly how childish and immature he is, lashed out in an all-caps Twitter rage telling Kimmel , “JIMMY KIMMEL PUT YOURSELF IN MY SHOES … OH NO THAT MEANS YOU WOULD HAVE GOTTEN TOO MUCH GOOD P**** IN YOUR LIFE…”

“YOU CAN’T PUT YOURSELF IN MY SHOES. YOUR FACE LOOKS CRAZY … IS THAT FUNNY? … OR IF I HAD A KID SAY IT WOULD IT BE FUNNY???”

“SHOULD I DO A SPOOF ABOUT YOUR FACE OR YOU F***ING BEN AFFLECK… #NODISRESPECTTOBENAFFLECK#ALLDISRESPECTTOJIMMYKIMMEL!!!!”

I don’t need to say much about this because Kanye’s own words are pretty damn hysterical and they stand on their own insanity, don’t they? But how is Ben Affleck feeling about being dragged into Kanye’s rant? None too happy from what we are hearing. He is glad that the Batman backlash has slowly calmed down and the drama surrounding his marriage to Jennifer Garner also seemed to get a whole lot quieter. Ben may not be your favorite actor but he is sane and very much a grown man so he can’t stomach a childish hothead making crazy claims about his sex life.

Will Ben actually comment? Don’t hold your breath. Part of being a true class act is ignoring the bullshit that people fling. Maybe Kanye should take a page from Ben’s book don’t you think? Tell us in the comments below!