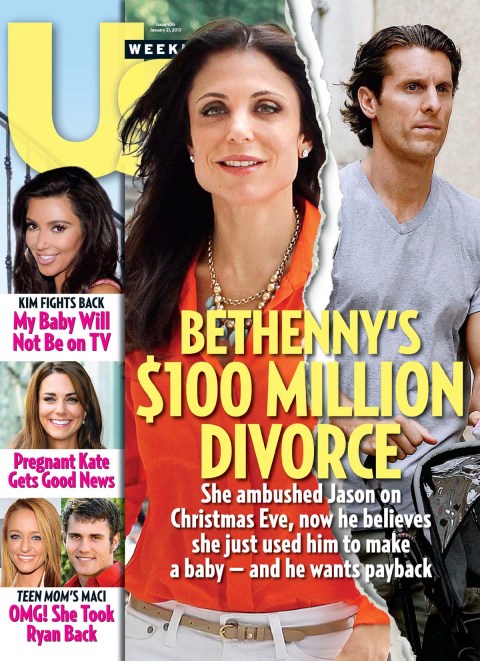 Bethenny Frankel has never made my list of favorite celebs—probably because she looks super insincere, all day every day! She just filed for divorce from husband and baby daddy James Hoppy, but team Bethenny reports say she and Jason are eager to get on well for the sake of their daughter, co parent, and move on quietly. Yeah right! Us Weekly, print edition January 21, 2013, reports that over $100 million is at stake in her divorce, and after a Christmas Eve ambush, Jason is set on payback! It sounds like Jason has finally realized that she never loved him, she just used him—for a baby, a TV show, and now to drum up gossip before the premier of her new talkshow—and he’s not going to take the abuse lying down!

Barely two weeks after announcing her pregnancy, Kim Kardashian adamantly promises she will not put her and Kanye West’s baby on TV. We’ve heard from other sources that she’s eager to document everything up to labor, but wants to protect baby Kimye from the fame and flashing lights. Are good mom insticts kicking in?

After emergency visits to the hospital in early December after risk of dehydration and severe nausea, Kate Middleton has finally gotten some good news—but about what, we can’t imagine! We should take a minute to wish the Duchess of Cambridge a happy birthday. Could this be about Queen Elizabeth allowing a potential daughter the title of Princess?

Dr Drew Pinsky will be disappointed to hear that Teen Mom star Maci Bookout is back together with her baby daddy, Ryan Edwards. The two split shortly after the birth of their son, and Ryan has been a first class jerk ever since. What on earth compelled her to forgive his past transgressions? Pick up Us Weekly to find out!