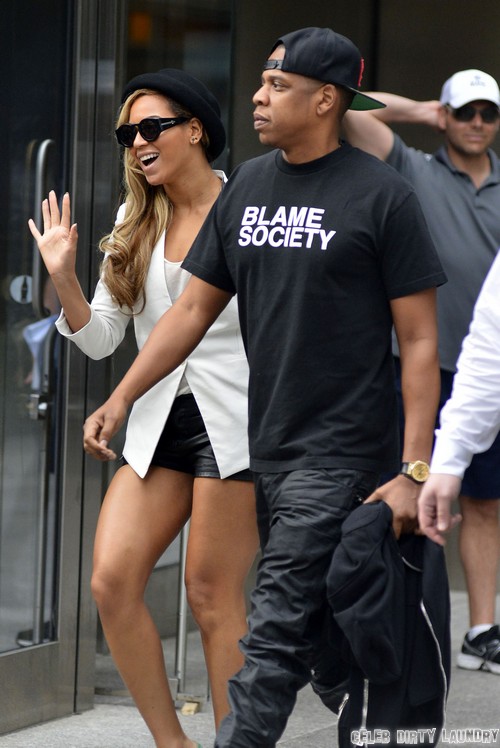 When the news first announced that Kanye West was dating Kim Kardashian, my first reaction was wondering how Jay-Z and Beyonce would react to the news. To Jay-Z’s credit, he was able to put aside whatever personal feelings he had on the matter and be civil to Kim in public, but the same can’t be said for Beyonce. There’s been several important occasions where Bey has completely ignored Kim, and it’s pretty obvious that she can’t stand her. And why should she? Beyonce is an A-list music star, and one half of the world’s most powerful music couple. Kim Kardashian is and always will be a reality star before anything else.

Now, Kim and Kanye both had their first baby a couple of days ago, and it was expected that Kanye’s close friends would congratulate him on the birth. And while I’m sure he was privately congratulated by everybody close to him, Beyonce went one step further and posted on her official site, “Congratulations Kim & Kanye, Enjoy This Beautiful Moment Together — Beyonce.” The message was accompanied by a picture of Kanye and Kim smiling at each other, with the words ‘congratulations’ superimposed on the image.

Has Beyonce finally put her feelings on Kim behind her? Well, probably not. It’s much more likely that Jay-Z pressured Beyonce to send a public message, in light of all the reports about how much Beyonce hates Kim. After all, both Jay-Z and Beyonce are friends with Kanye, and while Kanye’s a limp dick when it comes to sticking up for his girlfriend/baby mama, the least he could do is make sure that his friends support her.

I do have to imagine that trying to find a happy picture of Kim and Kanye must have been painful for Beyonce. Oh, who am I kidding, she probably had one of her many minions do the work for her.