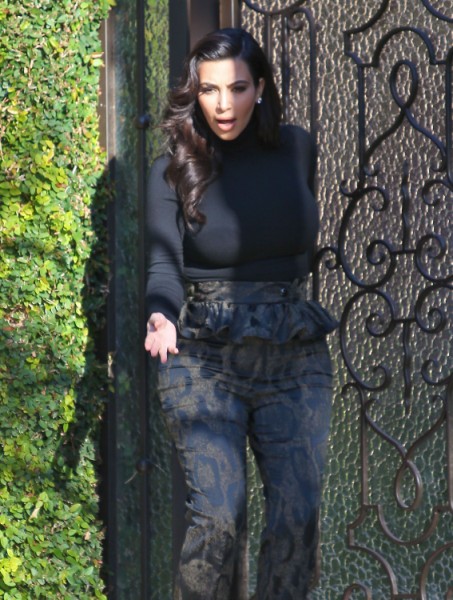 So… something’s up with Kanye West. Would I care if he wasn’t dating our Kimmy? No, but he is so I have to be. Either homeboy is freaking out about Kim Kardashian’s pregnancy and nervous to be a father or he’s battling some serious issues.

There’s been another rant! Kanye’s got something stuck up his ass and he just needs to tell the world about it. At his Paris show he told the crowd: “There’s no motherfucking awards or sponsorships or none of that shit that can stop the dedication to bringing y’all that real shit. No matter how they try to control you, or the motherfucker next to you tries to peer pressure you, you can do what you motherfucking want. I am PICASSO. I’m WALT DISNEY, I’m STEVE JOBS.”

Didn’t Picasso like to date famewh-res too? That’s about the only similarity I found there.

Maybe if there was no Beyonce/Kim Kardashian feud everything would be a whole lot better? I had to take it there. You know I did. It might not help things but I doubt the guys would let that nonsense get in the way of their friendship though. They both have too much respect for Beyonce to make her hang with Kim if she doesn’t want to.

But if these spats tell us anything it’s that the future doesn’t look bright for Kim and Kanye despite everything she’s telling the tabloids about true love and all that. There’s just too much ego. You have hear it in every rant. Kanye is all about his legacy and getting his. He’s going to demand Kim take a backseat which we’ve already seen in her contemplating leaving her reality shows. Will she be able to throw her career aside? I think she’ll try. Kim’s nothing if not a people pleaser. But I wonder how long Kris Jenner will let that last. Kim’s the golden goose. If the family empire stalls without Kim, Kris will need to call in some favors and Kim will have to decide between family and baby daddy. I used to think all the Kris Jenner/Kanye West fights were just silly tabloid nonsense but there might be some smoke. Does Kris see something about Kanye’s attitude that Kim doesn’t?