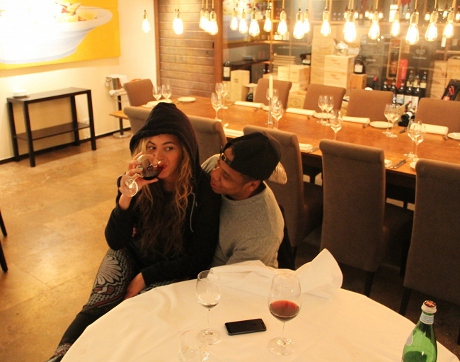 Only a couple of years ago, Beyonce would never have engaged these rumors. She was the Queen B, she had no reason to. She would coolly be above it all, letting the little people gossip away. But not anymore – now she has started responding to every little thing, from rumors to gossip to bad pictures.

Her latest attempt to destroy the pregnancy rumors comes from a picture she posted with Jay-Z. Everything would have been normal, except for the fact that Beyonce was holding a glass of wine in the picture, a clear indication that she was drinking. Ergo – she’s not pregnant.

Now, I know what some people will say – it’s a coincidence. Except posting a picture of you drinking alcohol while the Internet continues talking about your pregnancy is a surefire way to shut down the rumors, and Beyonce knows that.

And she’s not even just holding the glass of wine – she’s drinking it! Who posts a picture of themselves drinking wine? Not posing with it at dinner, or even pointing it out to their friends – but physically drinking it? This isn’t college, where students post pictures of themselves drinking for kicks. This is a private dinner with her husband – so what’s the need for the picture? Unless she’s trying to tell us that she has a drinking problem.

See, it just ruins the mystique. The whole point is that Beyonce is a big enough celebrity that people will continue talking about her no matter what. She needs to stop desperately trying to control every single thing about her public image before it backfires  in her face – and it’s already started to.