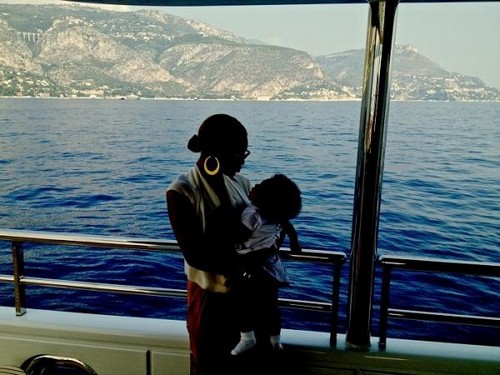 Beyoncé, fierce superstar and proud mother, recently revealed that her year old daughter Blue Ivy Carter is beginning to talk. The Notorious BIC is somewhere on her Fisher-Price smart phone bragging to her friends at the playground, warbling, “My Momma truly was a showstopper tonight at the SuperBowl! She did that!” Unless of course someone forgot to pay the light bill at the Superdome in New Orleans , which caused the stadium to lose power after King B’s halftime performance, but Blue Ivy no doubt had plenty to say since she’s able to form words.

Beyoncé spoke with the with the NFL Network’s Super Bowl Live show, about how her daughter with Jay Z has been coming along in her development.

“It’s just such a beautiful time in my life to have a child and every day see something new and see her learn something new,” she said.

At the present moment, it’s Beyoncé’s world and we’re just living in it. Her lip synching at President Obama’s inauguration overshadowed the Commander in Chief, she blew out the circuits at SuperBowl 47 with an incredible performance and her media blitz continues with a documentary on HBO, ‘Life is But A Dream’. She’ll also be appearing at the Grammy’s and is the face of Pepsi’s latest ad campaign. There will be no escaping this juggernaut but at the end of the day, while she may be a deity glorified to the heavens, she’s like most women. She’s a proud mom.

Beyoncé is recognized the world over, but yet it is Blue Ivy that is her world. Her little girl is more precious than any pearl. And since that rhymes, I expect a royalty check sometime in the future if Bey decides to dedicate that ode to Blue. Or maybe not since she’s been accused of stealing songwriting credits but a peasant like me won’t mind eating my slice of cake for King B.