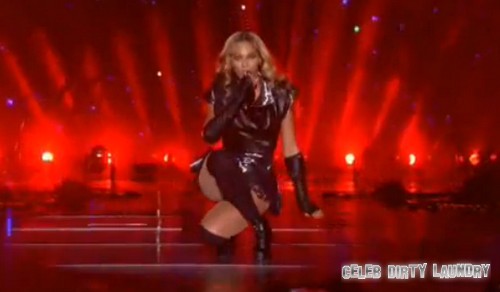 Beyonce performed at this year’s Super Bowl halftime show and here is what our music critic had to say: Saying that Beyonce’s performance at the Super Bowl was crap is an understatement – it was clear to us that after watching her halftime show, she had missed a lot of rehearsals because not only were her vocals off-key, her dance routines were recycled from her world tour in 2009. It’s pretty ridiculous, but let us break it down for you on why we say we were not impressed with the entire thing:

Destiny’s Child popped out and we were all hyped up, until Michelle Williams and Kelly Rowland started singing. It was obvious that Beyonce had told the sound engineers to turn their microphone volume down so that her messed up vocals can overpower theirs. Kelly was pretty much just there to show off her new weave and Michelle.. well.. Michelle didn’t really do anything – she missed out on so many lines, it was so confusing what she was actually doing on stage. She’s lost touch with reality.

Harsh words from Mr. Maurice!  But hey, he calls then them as he sees them and that is his right.  Do you agree?  Did you think that Beyonce’s halftime show was useless or amazing?  Let us know if you’d hire her again for another big show?  First she ruined President Obama’s inauguration with her lip-syncing and now she disappointed at the Super Bowl.  Maybe it’s really time for her to retire?