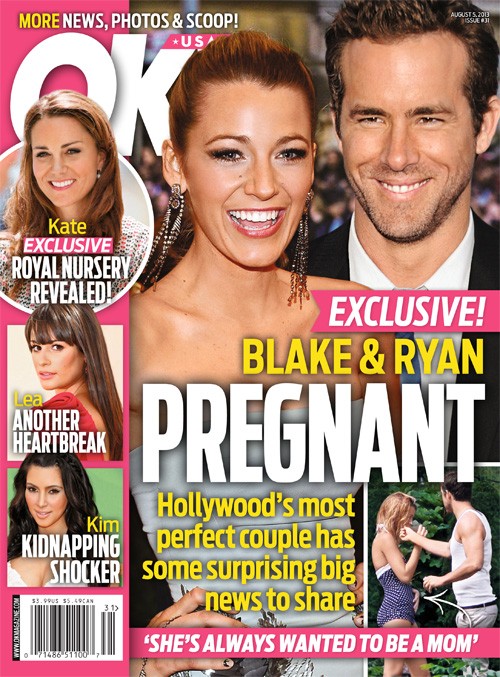 Blake Lively’s rep continues to deny that there’s anything going on with Blake’s womb area, but tabloids refuse to believe it. On the cover of OK! Magazine, August 5th edition, the headline screams that Blake and Ryan Reynolds are pregnant, adding, “Hollywood’s most perfect couple has some surprising big news to share.”

Leonardo DiCaprio is probably shuddering in relief, thinking how close he came to being locked into a marriage and family. Anyway, the headline states that Blake has ‘always wanted to be a mom’, and that the couple is waiting to share the news with close friends and families. You know, despite the incessant denials from both Blake, Ryan, and their people, I would believe this. Blake has been staying very undercover the last few months, which is very, very unlike her. She’s also not booking any jobs and doesn’t seem to be focusing on her career, and even said in a recent interview that she’s putting her family ahead of her career. I don’t know how many more hints we need.

Another headline on the cover involves Kim Kardashian in a ‘kidnapping shocker’. Huh. Maybe Kim and North West have been kidnapped and held captive by Kris Jenner, who is holding them for ransom unless Kanye West allows her to debut North West on her talk show.

A headline also focuses on the reveal of Kate Middleton’s royal nursery, but we know that Prince George is currently at Bucklebury with his maternal grandparents and a very un-royal nursery and surroundings.

Finally, the last headline focuses on Lea Michelle’s ‘another heartbreak’. I don’t know what’s more heartbreaking than Cory Monteith’s unexpected death, but I’m sure this has something to do with Cory. Lea recently thanked her fans and supporters for sticking by her through this difficult time, and she’s to be commended on how she’s dealt with everything.