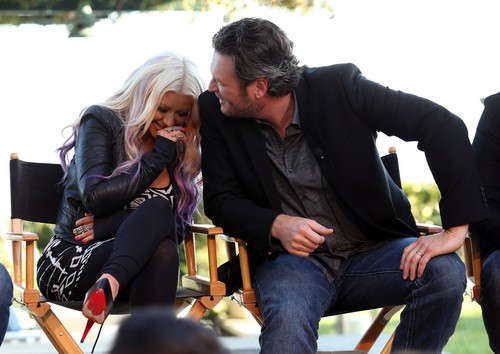 A new report from the National Enquirer leads into a headline about Blake Shelton trying to hook up with his Voice co-star Christina Aguilera, which is apparently making Miranda Lambert very jealous.

A source tells the Enquirer that, “Blake confessed to having a crush on Christina, and Miranda is furious that he won’t stop talking about her. She was really upset, especially after Blake gushed about how sexy Christina looked and how he wished Miranda had as good a figure. Miranda fears the temptation of being around Christina for long hours day after day may be too much for Blake.”

While the Enquirer’s take does err on the fantastical side of tabloid reporting, what with Blake’s nickname being ‘Horndog Shelton’, the denials issued by Gossip Cop are even funnier. They usually stick to claiming that the report is untrue and then make a jab at the tabloid – however, they went even further in this case and stated that Blake and Christina are like ‘brother and sister‘ on the show.

Um, are they watching the same show I am? I don’t know what’s going on between them, if anything, but the vibe between them is definitely not a vibe that siblings would share. In fact, if it weren’t for the fact that Blake was married, I would just assume that they were hooking up. Obviously, being married wouldn’t stop someone from cheating, and in Blake’s case, I don’t doubt that he’s probably already made advances on Christina.

What do you guys think? Do you think Blake really did hit on Christina after she lost weight? That would make him a bit of a superficial douche if he did, no? Well, he is a part of Hollywood, and that’s to be expected, I suppose. Let us know your thoughts in the comments.