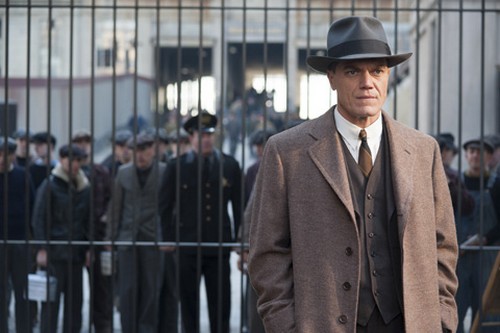 Tonight’s episode of BOARDWALK EMPIRE was another great episode and I cannot wait till next week.  We have a sneak peek video and some insight for you below on what is going on next week below.

On tonight’s episode after a cautious reunion with Margaret in New York City, Nucky headed to Tampa to work out details of his land deal with Bill McCoy and reconnected with Sally Wheet. Richard Harrow returned to Atlantic City and made a confession to an ailing Paul Sagorsky, who encouraged him to get over the past and returned Julia  and Tommy. Having lost J. Edgar Hoover’s confidence, Agent Knox found a new way to gain Eli’s trust. Meyer Lansky decided to go it alone on the Tampa land deal when Lucky Luciano got spooked by Vincenzo Petrucelli, an investor with ties to Joe Masseria in New York. Chalky took out his frustrations on Daughter Maitland.  Lots happened on episode 6 and if you want to find out we have a full and detailed recap, right here for you.

Spoiler alert: If you’re one of those people who doesn’t like spoilers, stop reading now! We have some juicy spoilers for you about the season 4 episode 7 of HBO’s “Boardwalk Empire”

On next week’s show Daughter and Chalky are sleeping together and Chalky wants to extend her stay with him but he has to negotiate with Dr. Narcisse and that is going to mean Chalky is going to have to give him something.

It looks like Eli’s wife could not prevent him from going to see their son.  Eli is not pleased with Willie and tells him he is going to do what he says going forward.