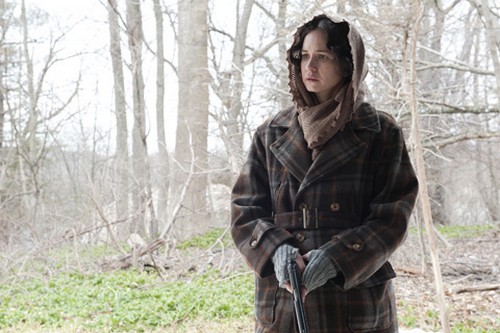 Tonight’s episode of BOARDWALK EMPIRE was another stellar episode and I cannot believe next week is the finale.  There are so many stories unresolved I am guessing the finale is going to be a cliffhanger.  Good news thought, we just happen to have a sneak peek video and some insight for you below on what is going on next week episode called, “Farewell Daddy Blues”  below.

On tonight’s show Nucky took inventory after being warned of a skunk in his cellar. As the episode progressed it seemed that Nucky was starting suspect that Eli might be that skunk.  On the lam following a close call, Chalky and Daughter took refuge outside Wilmington with Oscar Boneau, his mentor from years ago. Gillian considered selling her mansion and starting a new life with Roy Phillips.  The shock of the evening was finding out that Roy was a Pinkerton man and he was playing Gillian to get her to admit she killed Roger.  Lots happened on episode 10 and if you want to find out we have a full and detailed recap of tonight’s episode, right here for you!

Spoiler alert: If you’re one of those people who doesn’t like spoilers, stop reading now! We have some juicy spoilers for you about the season 4 episode 11 of HBO’s “Boardwalk Empire”

Official HBO synopsis of next week’s episode: “Eli is going to brace for the worst as Agent Knox launches his plan to bring Nucky down. Capone and Torrio will reach an agreement in Cicero. Chalky will look to settle scores. Richard (Jack Huston) will step forward to save Tommy (Brady Noon), at Gillian’s expense.”  The episode was written by Terence Winter and Howard Korder, and it was directed by Tim Van Patten.

On next week’s show Nucky meets with Doctor Narcisse and makes it clear if he tries to take anything from him then they have a problem.  Nucky enlists the help of Richard and asks what he would do.  Richard of course tells Nucky he would do anything he asks.   It looks like Nucky might get arrested.  There is trouble again with Torrio and Capone.

We know Chalky thinks Nucky betrayed him and next week it all comes to a head when Chalky faces Nucky with a gun.  Nucky assures Chalky they both want the same thing.  Meanwhile, it appears Agent Knox is not pleased with Eli.

Boardwalk Empire season 4 finale, “Farewell Daddy Blues” airs on HBO on November 24th, 2013. Check out the preview video below of season 4 episode 12 finale and let us know in the comments below what you think!  Are you enjoying season 4 of Boardwalk Empire?