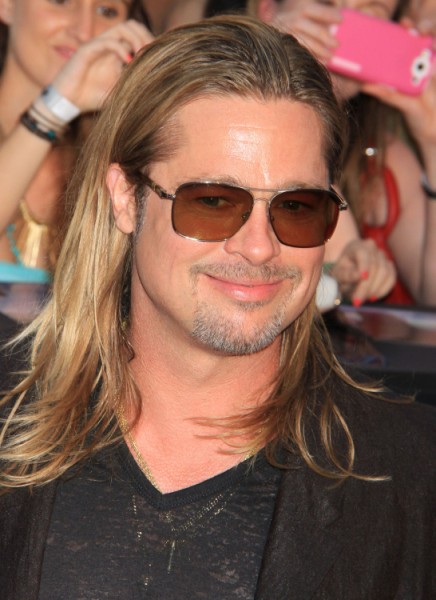 I know it seems like I’ve been harping on Brad Pitt’s weight gain a lot lately but what’s the big deal? Jessica Simpson eats shit every time she goes for the froyo and we’ve practically made it a competitive sport to point out how many pairs of spanx Kim Kardashian’s wearing each day. Dudes who can’t put down the fork should get the attention too. Only, in Brad’s case, is it that he can’t put down the needles?

The National Enquirer has a lovely story about the stress eating Brad Pitt’s doing which has led to his recent 20-pound enlargement. We can all blame Angelina Jolie. Her double mastectomy has just been too hard on him and he hasn’t had time to look after himself. Add that along to the crazy promotions he’s doing for World War Z and you’ve got some full-on bloat face. Lainey Gossip posted side by side pics of Brad Pitt and Val Kilmer. Not Top Gun Val Kilmer but wet suit on the beach Val Kilmer. It’s uncanny and genius.

So do you buy the explanation? Sure. Why not? Dude has had a full year AND he’s turning 50 so it’s a viable excuse. But if you’re Brad Pitt would you rather be called fat or obsessed with fillers? Brad Pitt’s body doesn’t look bigger. His abs are still flat, his legs still in proportion. Shouldn’t the 20 pounds be equally distributed? Why is it so concentrated in his face??  I’m sticking to the injections theory. His people are probably only so happy to tell people he’s just been overdoing it on the ice cream due to his family situation. People can empathize with men stress eating – especially when their partners were sick. But plumping up the cheeks because the wrinkles were getting to be too much is not something the everyday American dude watching football or zombie movies on the couch can relate to. Of course I’m not a dude or 50 so what the hell do I know? I just like the fact I get to call out a Hollywood actor for getting a little chunky for once. Don’t worry, Kim K, you’re little reprieve won’t last long!