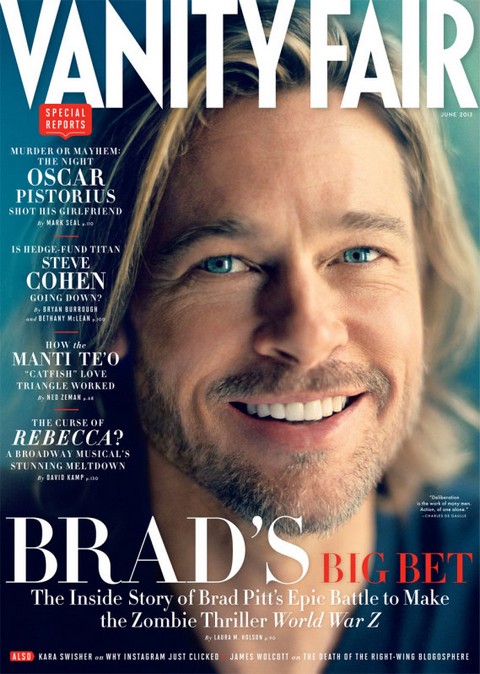 The marketing team over at Paramount is really working overtime to do damage control, aren’t they? Brad Pitt covers the latest issue of Vanity Fair in one of his signature poses, and you can bet that he’s turning up the charm in those photos. You see, this is his chance to convince YOU to go see his new movie, World War Z. But why does he need to convince you? It’s got zombies, it’s a Brad Pitt movie, and it’s a tentpole, right? And it’s releasing in the summer. So what could possibly go wrong? Well, as it turns out, everything.

There have been many reports commenting on the disastrous nature of the World War Z shoot. So let’s go step by step to make this simple to follow. Brad Pitt initially got into a bidding war [allegedly] with Leonardo DiCaprio over the rights to the novel [yes, World War Z is based on a novel]. Brad won, and he took it to Paramount. He was excited, and he had every right to be. The book has a passionate following, is well known, and had the potential to be a thoughtful, action-packed, and beautifully made film about ZOMBIES that could actually have been a contender at the Oscars. In fact, the initial script was also said to have all those ingredients.

Oh but, there’s a problem. People don’t really equate Oscar quality good with blockbusters tentpole good. We don’t really know what happened from here on out, but basically new screenwriters were brought in to change most of the movie, and Brad and the director Marc Forster seemed to get into a pissing contest. Because of this pissing contest, important details like paying millions of dollars in costs were FORGOTTEN. Can you believe it? They forgot to keep track of their expenses and ended up having to pay tens of millions extra in the end. Talk about unorganized.

Eventually, the last forty minutes of the film ended up being re-shot. According to Brad and the article, it was because the ending ‘didn’t work’. Um, why didn’t you think of that BEFORE you shot the film??? So, in lieu of another explanation, I’m going with the one that everyone seems to agree on. Because they rushed production and the director and producers couldn’t agree on anything, it became a battle of who had the most creative control. Brad Pitt, being Mr. Movie Star, won the creative control battle and ended up getting his way. Which appears to be zombie apocalypse action movie, instead of thoughtful commentary on the possible end of mankind like it was in the book. So yes, this movie will be a mess. No doubt, audiences will love it. So why am I complaining? Oh, I’m not. This is Hollywood, y’all.