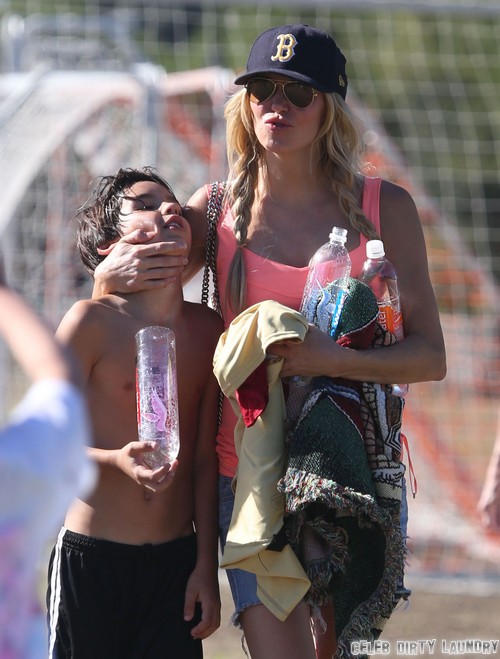 Since her very public and painful divorce from actor Eddie Cibrian, Brandi Glaville has found independence and success as a one of the stars of Real Housewives of Beverly Hills, and author of New York Times Bestselling novel Drinking and Tweeting: And Other Brandi Blunders. Brandi is the first to admit that she is flawed, but she has grown a lot since 2012 which is evident in her ability to disengage from the near daily provocations she endures from Eddie’s new wife LeAnn Rimes. Although Brandi is in a much happier place, her divorce and its ugly aftermath have left her scarred to the point that she vows she will never marry again.

Brandi recently sat down with Life & Style for an interview and said point blank, “I don’t want to get married again,” explaining that she doesn’t, “… know if [she] 100-percent believe relationships are supposed to be lifelong.” Furthermore she is not willing to risk having to endure another divorce which she found, “brings out the worst in people.” Plus Brandi quite likes where she is right now in her life saying, “I like being single and that there’s not a guy I’m pining for and sad over. I have a great time with my friends. There’s no one breaking my heart right now. I’m not in that place — I’m happily moving forward.”

In the same interview Brandi also revealed that the wounds of her divorce were recently reopened – reminding her that some wounds never completely heal. It began when her youngest son Jake asked her if she still loved his dad (Eddie). She did the right thing and said that of course she still loved his dad – because that is what a good co-parent who doesn’t want to psychologically harm their child does. When Jake approached Eddie with the same question instead of doing the right thing – even if it is a lie and would upset his emotionally imbalanced wife – he told Jake that he does not love his mother. Brandi revealed that, “Jake said, ‘Daddy doesn’t love you,” adding that, “It made me sad that Eddie would say that to the kids.” Yes my friends at Celeb Dirty Laundry Eddie Cibrian told his 6-year-old son that he does not love his mother. Wow. Just. Wow.

Jake is getting to an age that he better understands what happened between his parents, and the finality of it. Naturally he will have questions, which will either help or hinder his ability to process what really happened. It is sad that Eddie, who has already broken many of the rules of healthy co-parenting by allowing Psycho Sally to interfere with his ability to properly co-parent with Brandi, is now further hurting and confusing his son. All Eddie had to do was look into those innocent eyes and tell his son, “Yes of course I love your mother, and we both love you, but sometimes adults grow apart,” or something to that affect – anything but what he did.

When children are involved a divorce is not a means to an ends, but an ongoing process. Divorce does hurt children, but what hurts them more is how it is dealt with and Eddie and LeAnn have done everything in their power to make this difficult transition that much harder on the two children involved. This can potentially harm their ability to develop proper coping mechanisms, as well as hinder their ability to form healthy relationships later in life. Check the research Eddie and Psycho Sally. I did.

You know I often wondered why Eddie ended up with someone as homely as LeAnn, because we can say looks don’t matter, but guys – especially shallow guys like Eddie – are very visual. I chalked it up to the fact that he married her solely for money, because what LeAnn lacks in looks she makes up for in money, which is basically catnip for an out of work actor like Eddie. Now though, after hearing how he could look his youngest son in the eyes and be so cruel towards Brandi I see that money wasn’t the only motive. It is becoming clear that these two losers are a match made in hell; they are both self-serving, inconsiderate, vindictive jerks who deserve each other. In fact Eddie and LeAnn should just find a way to make their messed up union work, because at this point no one else would want either of them.