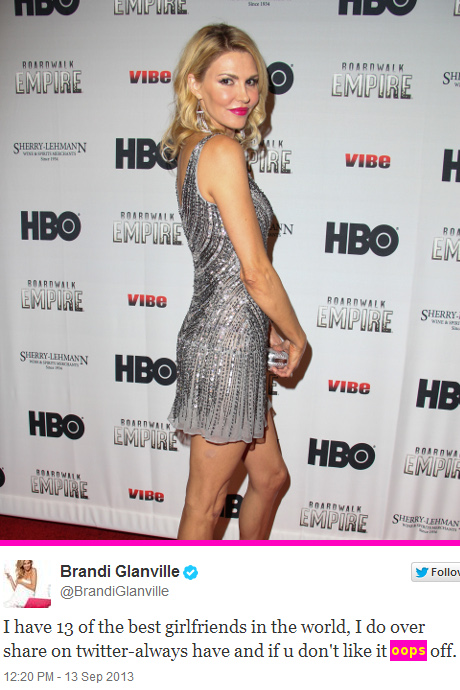 Brandi Glanville cuts a polarizing figure in the media. You either love her or you hate her, and it’s rare that anybody falls in the middle. However, even though someone of her stature is bound to have haters, it seems as though Brandi wasn’t able to control herself against the vitriol on Twitter.

She wrote, “I have 13 of the best girlfriends in the world, I do over share on twitter-always have and if u don’t like it fuck off.”

It’s not immediately clear what Brandi’s referring to, considering whatever comment might have set her off is buried in the middle of hundreds of other tweets. However, I do have to say that celebrities should know better than to get angry at fans on Twitter, and especially tweet their anger. In terms of “over sharing” on Twitter, we see all too much of that between her and LeAnn Rimes, her arch-nemesis.

What do they expect? It’s the freaking Internet. It’s a place where people come to blow off their steam, and write horrible anonymous comments about people they don’t know. I’m sure Brandi has plenty of fans, but I can’t imagine her haters staying silent either. She should know better than to let the haters get a rise out of her, and she should especially know better than to respond. In the end, she’s the one who ends up looking petty, because I highly doubt that her fans would be happy about being told to f*** off.

Maybe she felt bad about her tweet, maybe she didn’t, but she later followed up her previous tweet with, “I like when a man when pulls my hair every once in a while, I use Pantene conditioner, I have trust issues for sure.”

Again, no prompting and no re-tweets. What do you guys think set The Brandi Glanville Twitter Land on fire? And do you think it’s immature and unclassy for celebrities to loose their cool on Twitter, and especially to tell fans off? Let us know your thoughts in the comments.