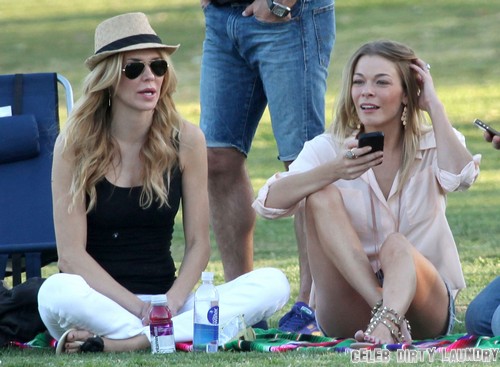 Brandi Glanville is having a laugh at this latest bit of news. It was recently reported that LeAnn Rimes and Brandi’s ex, Eddie Cibrian, were going to launch their own scripted reality show – whatever that means. However, the initial plan seemed to be to get actors to stand in for Brandi and Brandi’s young children. The children wouldn’t be allowed to appear on the show, and there was no way Brandi was ever going to make an appearance.

However, there are now rumors floating around that Brandi was actually given an offer to appear on the show, probably alongside her children. She tweeted, “I am laughing sooooooo hard at the offer that just came into my agent @alecshankman for me!NOT GONNA DO IT!!!! OMG OMG.” She didn’t give away the exact details, but she did later add when fans begged her, “Nothing to do with me naked, just a certain soon to be new reality slash scripted series.” Of course, that pretty much gave away the fact that it was going to be LeAnn’s and Eddie’s show. And then, she confirmed it when a fan outright asked her if it was LeAnn’s reality show, and her reply was, “hahaha maybe :)”

Considering LeAnn and Brandi’s long history of Twitter wars and media manipulation, I can see why Brandi decided to publicize the fact that she was asked to be on the show. She hasn’t exactly been on the best of terms with her ex-husband or his current partner, and I don’t blame her for saying no. Why would anyone want to put themselves in that situation, or their children? LeAnn and Eddie must have been nuts if they really thought she would say yes.