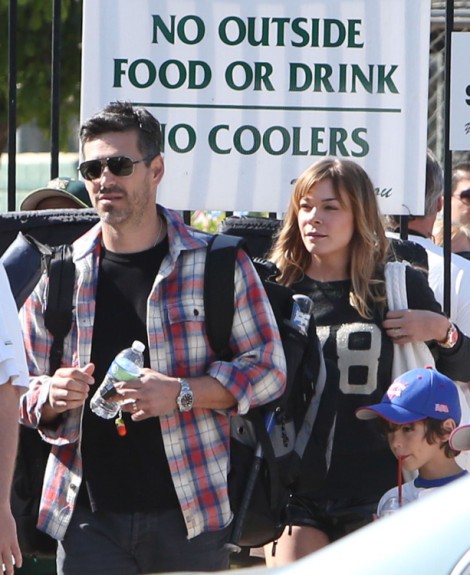 Just when I think that LeAnn Rimes can’t possibly be any more pathetic, she manages to sink a bit lower. This chick became famous for her voice nearly 20 years ago and could easily still be famous for primarily that. Her relationship with Eddie Cibrian began when they were both married to other people and now four years later that’s still what she is best known for. Perhaps if she had at some point gathered herself together, made a decent album and then did all of the things that a singer does to promote it, LeAnn mighty have bounced back in the court of public opinion.

Instead she purposely won’t tour or play any of the bazillion summer music festivals that pop up all over the place. According to the April 8th print edition of The National Enquirer, she IS still in demand and could easily rake in 2 million a year by performing! Apparently Eddie hates to be on tour with her and LeAnn refuses to leave him at home alone. Why? Because she doesn’t trust him at all. She knows that he was still hooking up with ex-wife, Brandi Glanville even after they got together. LeAnn is afraid  that Eddie could easily do more than drop his kids off at Brandi’s house if she doesn’t keep an eye on him. After Brandi’s current book hit the New York Best Seller list LeAnn fears that the reality star isn’t above creating new drama with Eddie so that she can reveal it in her next tell-all.

LeAnn is stupid to stay in this situation. If you are afraid to go to work because you believe your man will cheat the minute he has a few hours to himself, it’s time to cut the cord. Also if Eddie wants to cheat he already is. Her making it difficult has turned it into an even better game for him because it’s more exciting to get away with stuff!

Can you believe LeAnn has ruined her career for a man? Tell us your thoughts in the comments below!