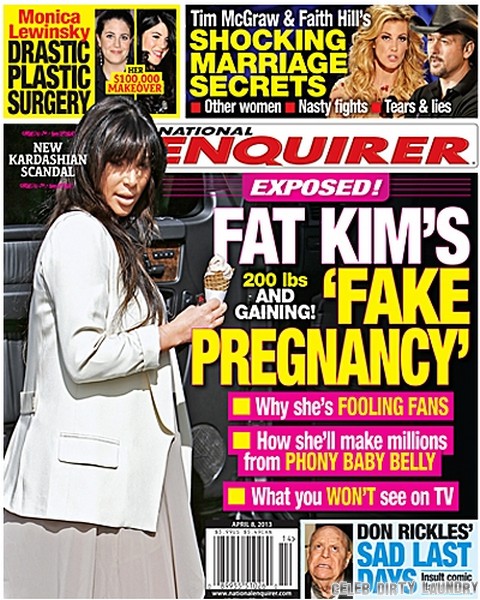 Is Kim Kardashian’s baby bump a complete fake?  It has been debated in some circles that Kim’s not really pregnant but instead a fat girl inhaling every big plate of cheese fries that happens to be nearby. She’s one of those women that looks very pregnant in some photos and then just fat in others. According to the April 8th print edition of The National Enquirer, the inconsistent photos may indicate that being pregnant might be Kimmie’s biggest lie yet. I’m still going to hold out a bit of hope that she’s at that awkward phase where her belly hasn’t totally popped yet and it keeps people that don’t know you guessing. It’s uncomfortable and you walk around looking and feeling like a fat girl, plain and simple. Still the mag does seem to have a leg to stand on with its proof of how this latest Kardashian family scheme will equal a goldmine in the bank.  Is Kim using a surrogate mother and will Kanye West still be a daddy?

Faith Hill and Tim McGraw have been together for eons by Hollywood’s standard but that doesn’t mean that their union is trouble free. According to the Enquirer the couple is as normal as they come when it comes to fighting. They’ve had some huge knock down drag out fights go down right in front of their three kids. There has also been an enormous amount of secrets and lies kept out of the medias’ eye, at least until now. Tim’s cheating has led to Faith dropping a bucket and a half of tears.

You remember Monica Lewinsky right? Then President Bill Clinton’s official cigar girl? She seems to have dropped off the earth in recent years and the Enquirer now knows why. Monica has spent thousands on plastic surgery so there’s a good chance that she could stop to ask a paparazzo for directions and they’d never even know it’s her!  Grab the latest issue to find out all the details on what one of the most famous hook ups of all time is up to nowadays.